The Roman-Catholic church of St. archangel Michael is situated in the town of Valaská Dubová, approximately 7 km away from the centre of Ružomberok.

The Neo-Romanesque church was built in 1866. It stands on an elevated area in the south-western part of the town, near the cemetery. There is a large main staircase leading to the church.

Preserved from the original furnishings are the altars, the baptistery and the pulpit.

In the entrance area of the church, there is a fresco, depicting Jesus Christ as a good shepherd giving a blessing.

The main altar of St. archangel Michael is one of the few preserved Baroque altars in the surroundings of Ružomberok. Placed in the altar is a painting of St. archangel Michael. His illuminated figure stands out on a darker background, he is holding a flaming sword in his right hand. With one of his feet, he is standing on the chest of a dragon, which is lying on its back and we can see its face. The painting is younger than the altar. Above the painting, there is a circle with letters IHS, surrounded by a halo made of rays and by clouds. Below the painting, there are statues of angels. The entire altar is abundantly decorated.

A noteworthy feature of the side altar of Virgin Mary is the painting of Virgin Mary by Tyrolean painter F. Dabert. Depicted on the blue background of the oil painting is Virgin Mary with her long fair hair let down. She is wearing a pink belted robe and a blue cloak. She is standing on clouds and she is surrounded by a halo made of rays. The altar is lined with ten heads of angels with wings. Placed at the top of the altar is a cross with a halo and a dove. The altar has beautiful decorative wood carvings.

The stone baptistery made of sandstone is of massive shape, which corresponds to a chalice. At the top, it has a wrought metal lid of a hemispherical shape. Placed on the lid is an imperial apple. Kept inside the baptistery is a copper bowl in the shape of a cylinder, used for baptismal water.

The Baroque pulpit is also abundantly decorated, with gold or silver coatings. There are four oil paintings on the pulpit, which depict the four apostles – Evangelists. John is portrayed with an eagle, Luke with a bull, Mark with a lion and Matthew with a human figure. In the pulpit, there is a painting of blessed Zdenka Schellingová. On the roof of the pulpit, you might notice statue of St. archangel Michael with open wings. On his head, he has a helmet with ornaments, he is holding a flaming sword, lifted up in his right hand, and a set of scales in his left hand.

The church has eight large windows, four on each side. In the front section – the sanctuary, there are two smaller windows with etched glass, depicting the scenes of annunciation to Virgin Mary and survival of Jonah in the insides of a whale. In the back section of the church, there are alcoves with statues of prophets.

Also noteworthy are the paintings on the arch of the church, made by well-known painter Jozef Hanula, a native of the nearby town of Liptovské Sliače. They depict, for example, the scene of Jesus driving money changers out of the temple, and we can also see a depiction of the Holy Trinity, St. Cecilia or St. Isidore. The painting also includes the municipal coat of arms. Another feature of the church are fourteen paintings of the way of the cross.

The church tower is a dominant element in the town and it has four bells. There is a spiral staircase in the tower, leading up to the belfry. Located at the top of the tower is a gold-coated cross.

In 2008, a Lourdes chapel was built near the church on the occasion of the 150th anniversary of the apparition of Virgin Mary in Lourdes. 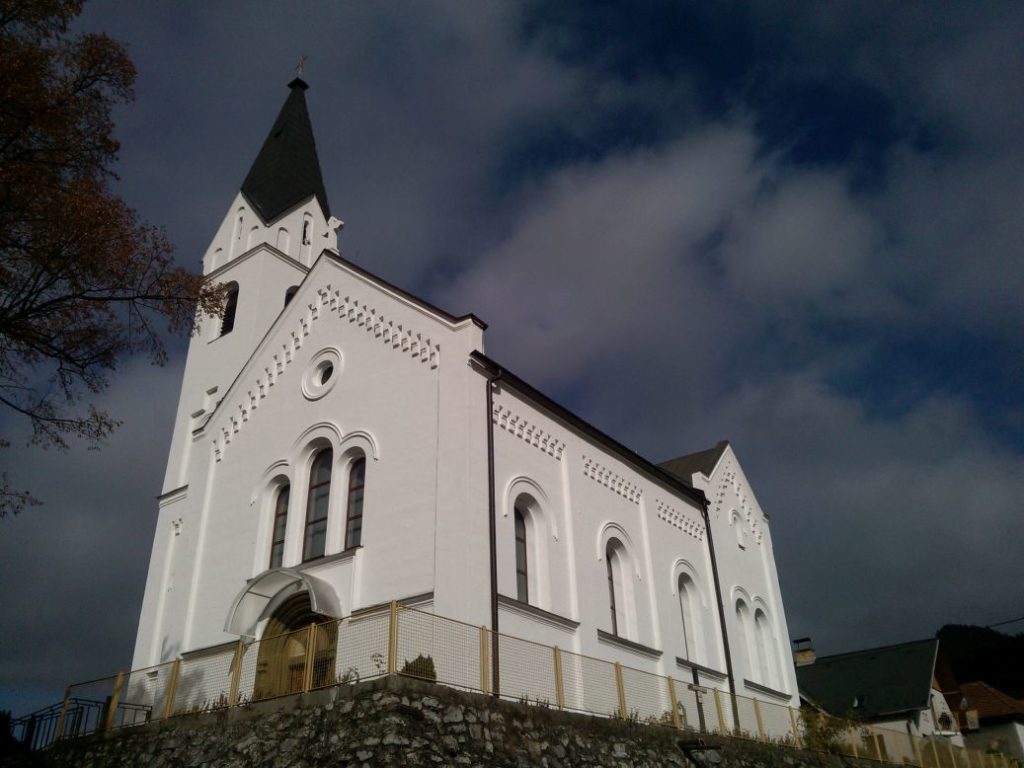 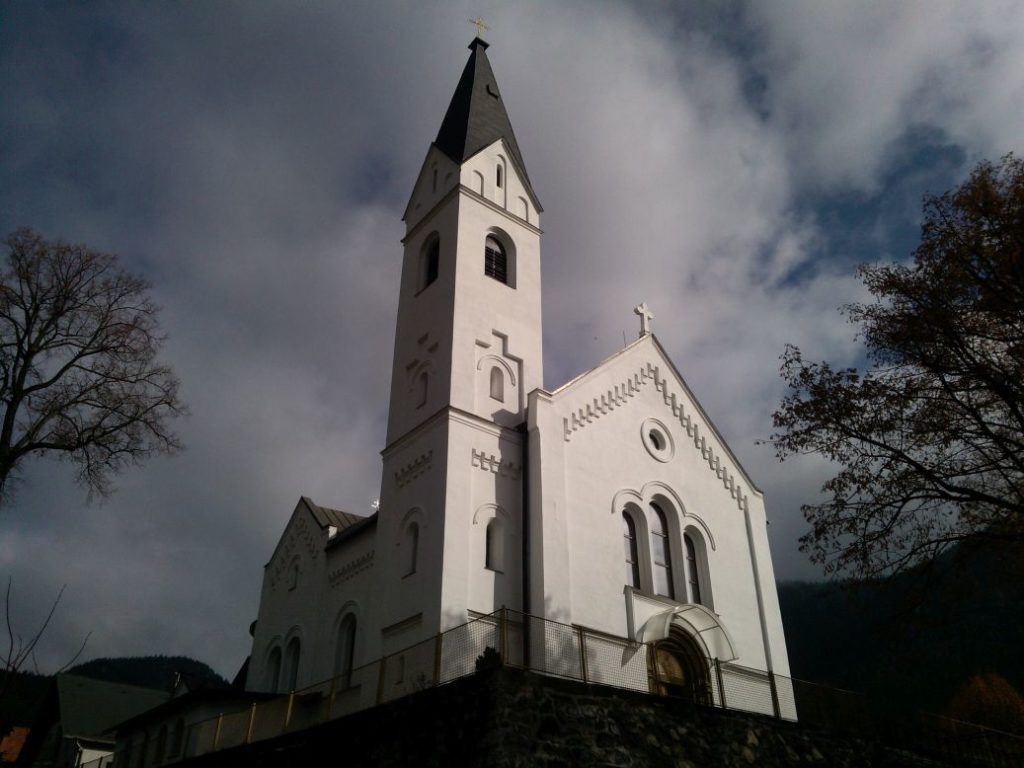 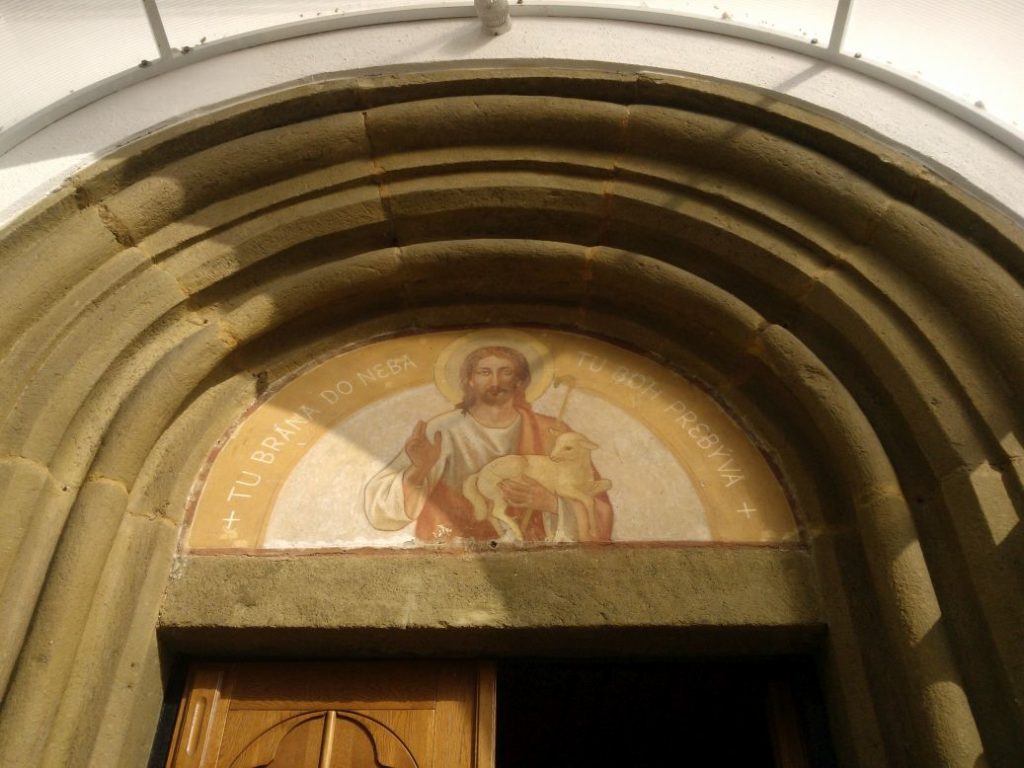 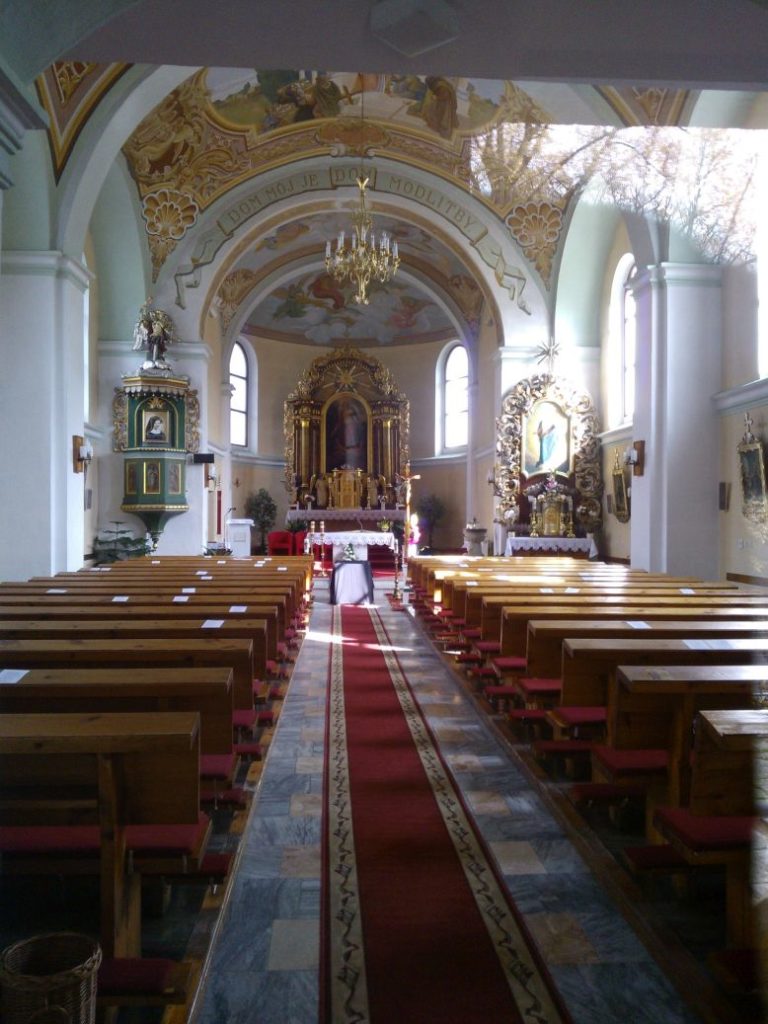 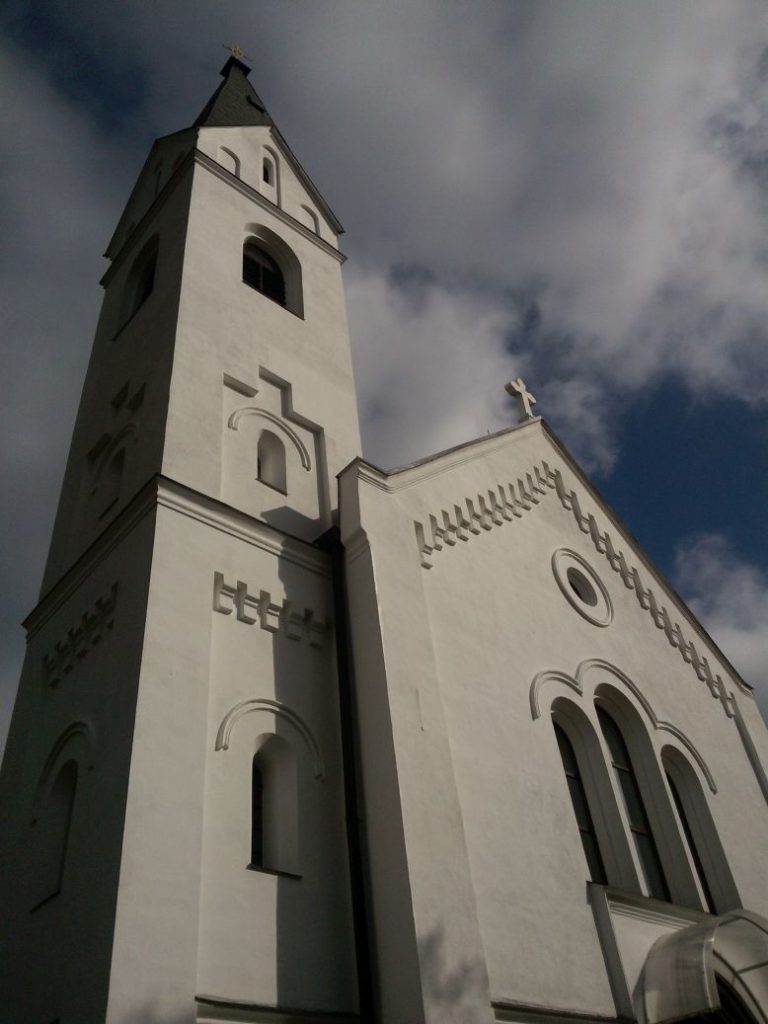 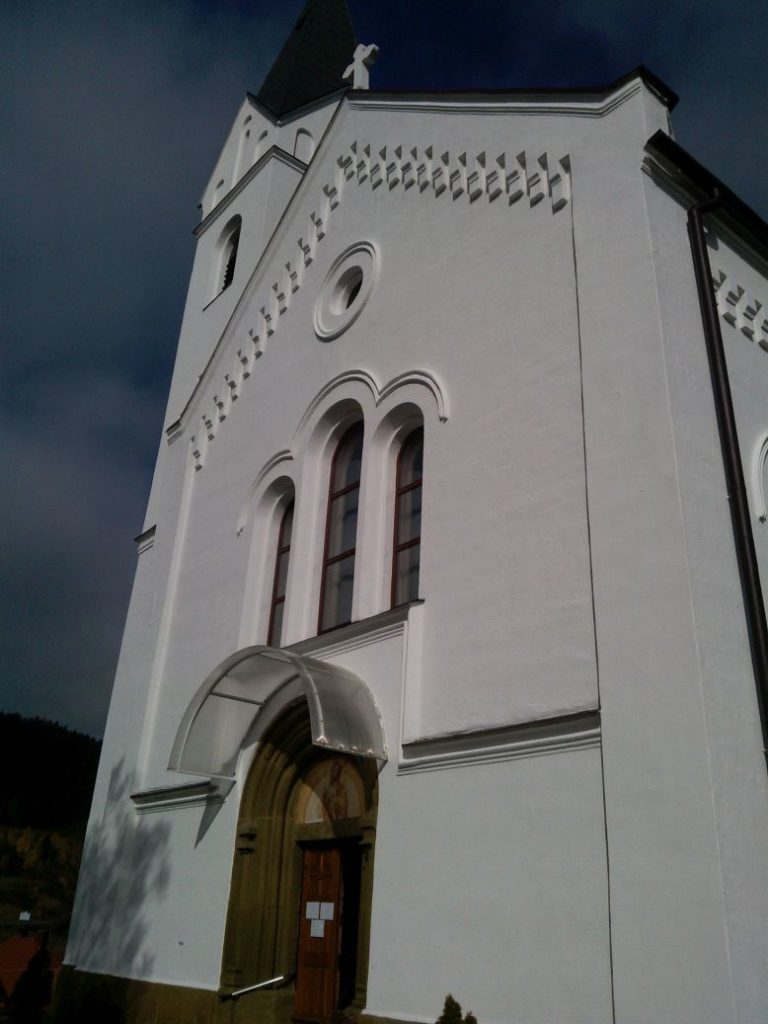 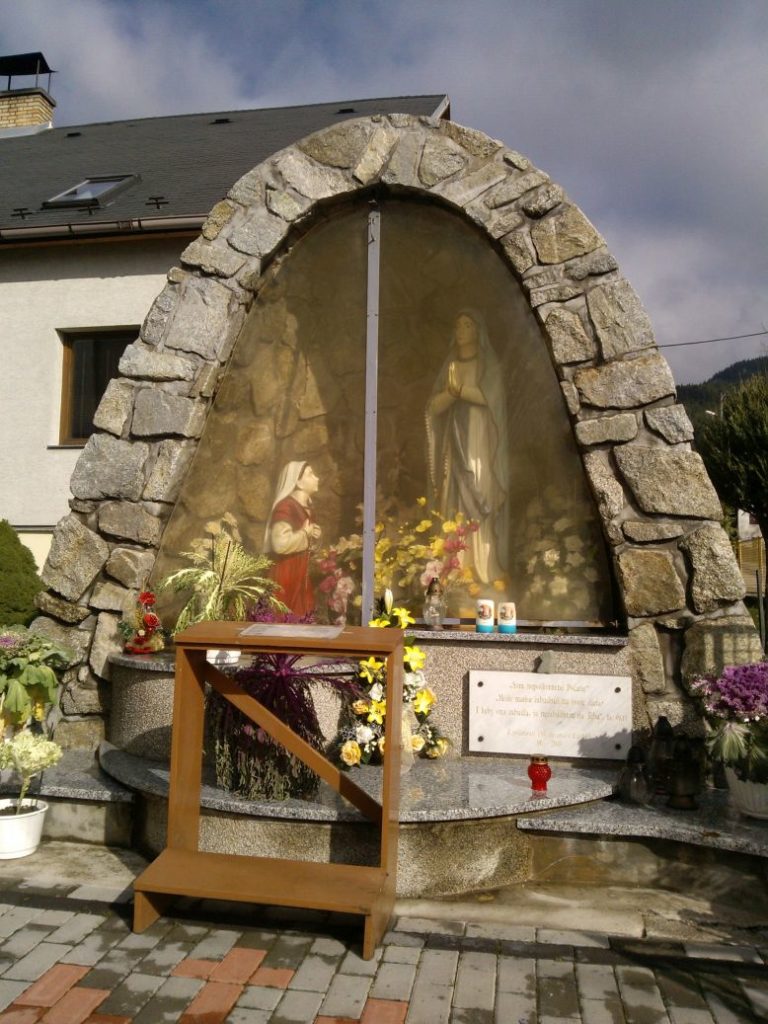 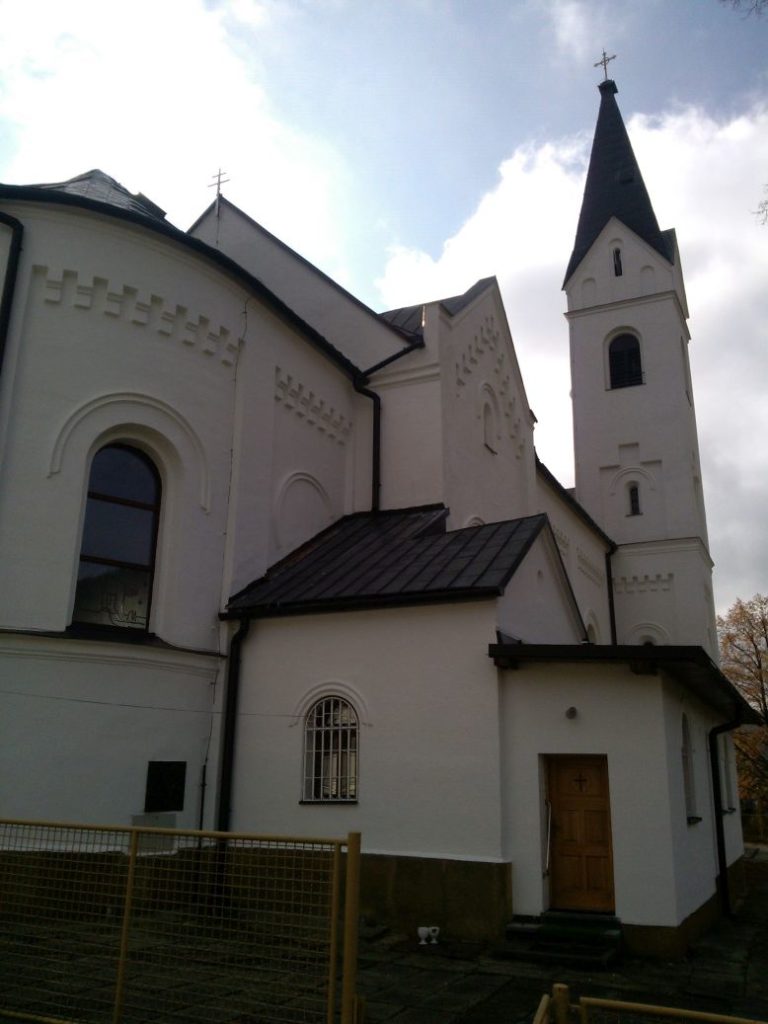 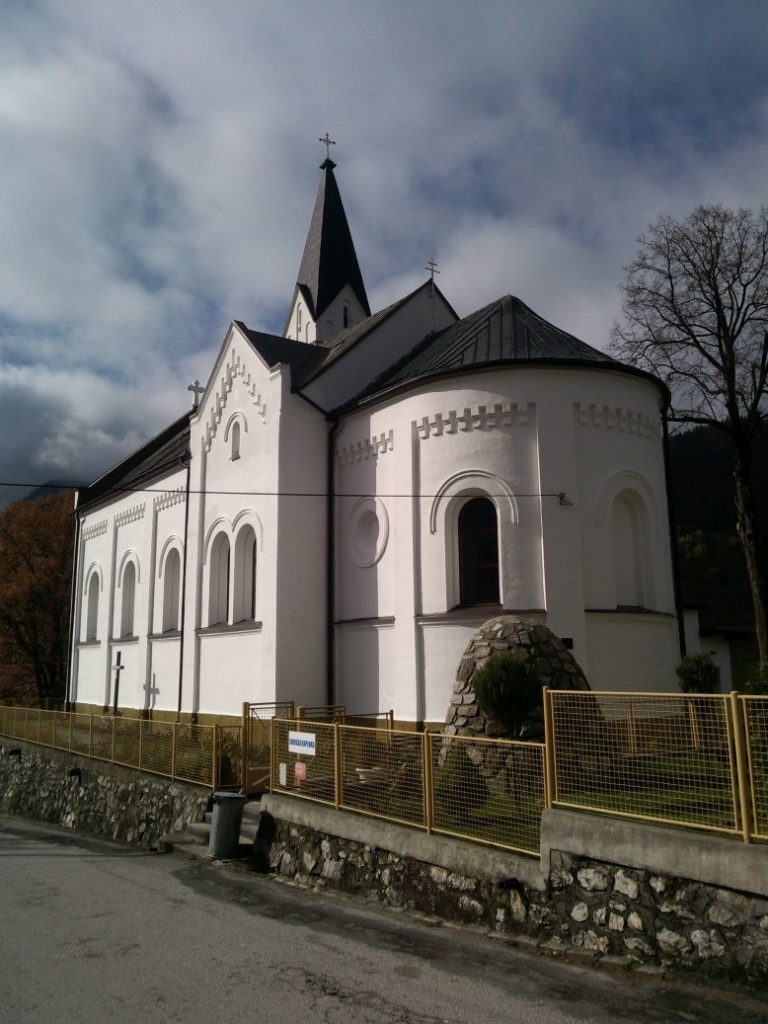