Church of St. Philip and Jacob in Liptovská Teplá

The Roman-Catholic church of St. Philip and Jacob is situated in the town of Liptovská Teplá, approximately 10 km away from the centre of Ružomberok.

This massive church, which is a dominant element in the town, is very rare, it dates as far back as the 13th century, thus being one of the oldest sacral buildings in Liptov. It is surrounded with a fortified wall with an entrance gate.

An interesting feature of the church is its tower with an onion-shaped roof. Inside the tower, there is a bell from 1543.

Several medieval architectural details have been preserved in the church, such as the Gothic box for storage of the Eucharist.

Noteworthy are also the paintings made by well-known painter Jozef Hanula at the turn of the 19th and 20th centuries. His intention with the paintings was to preserve the style and the themes of the original medieval paintings. However, he also added a few of his own original paintings. We can see, for example, Christ as Judge alongside with Virgin Mary and John the Baptist, angels with musical instruments, picture of Christ carried by two angels, instruments of Christ’s Passion, Jesus rising from the dead, three Marys at the tomb, and many more.

Another interesting painting is that of Constantine and Methodius preaching to people dressed in folklore costumes, located on the front wall. In the background, the painting also depicts the church in Liptovská Teplá. Among other interesting paintings, there are, for example: baptism of St. Stephen, the Holy Family in Joseph’s carpentry workshop and figures of other saint women and men. In the side chapels, we can find scenes from the life of Jesus: birth of Jesus, twelve-year-old Jesus in the temple, guardian angel, let the little children come to me, crucifixion of Jesus, descent from the cross, taking the body of Jesus away from Golgotha, lamentation.

The Baroque altar of St. Nicholas comes from the end of the 17th century. The central painting depicts St. Nicholas. He is wearing a red cloak, which is fastened with a buckle under his neck. With his right hand he is blessing two children in a tub by his feet. In the background, we can see cloudy sky with rays of sunshine shining through at the corner of the painting. Situated by the sides of the painting are the statues of St. Cyril and St. Methodius. Above the painting of St. Nicholas, there is a round painting depicting St. Martin, sitting on a horse. He is wearing a cloak and a feathered cap on his head. To his right, there is a beggar kneeling on the ground. Martin is holding the cloak with one hand and with his other hand he is cutting off the bottom piece of the cloak for the begging man. At the top of the altar, there is a statue of an unknown bearded man in a sitting position. He is wearing a long cloak and a robe, holding an open book above his knees in his left hand. To his left, there is a statue of St. Ignatius of Loyola: the founder of the Jesuit Order. He is also holding an open book, but in his right hand. To his right, there is a statue of St. Francis Xavier. Under the central painting, we can see a triangular sanctuary. On its front side, there is a depiction of a chalice with host. The left side of the sanctuary depicts apostle St. Mark. With his arms leaning against the table, he is holding a book, in which he is writing. He is sitting on a stool, under which you can see a lion. On the right side, there is a painting of apostle St. Luke. He is also sitting on a stool, under which there is a bull. He has long hair and a beard.

The main part of the altar of the Crucifixion is the statue of Crucified Jesus Christ. Under the cross, there is a statue of his mother Mary with tears on her face and her neck. In the background, you can see reliefs of the sun and the moon. Located by the sides of the cross are a spear and a sponge on a rod. By the sides of the altar, there are statues of sitting angels. At the top of the altar, there is a relief of the burning heart of God. The sacrificial table below the altar also serves as Holy Sepulchre.

The pulpit is also noteworthy. It is supported by a statue of lion with a long mane. The baptistery is decorated with paintings of several biblical figures, such as Jesus Christ, apostle Peter, apostle John, apostle James, Moses, Elijah, Aaron and others. Figures are portrayed in long robes. On the roof of the pulpit, there is a smaller chapel with a crucified Jesus on the top.

Also interesting is the painted wooden epitaph of Ján Kubíni. His wife Anna had it made for him in 1611. A dominant feature of the epitaph is the painting of the Victorious Christ. In the painting, Jesus is wearing a cloth tied around his waist and, around him, there is a red cloak blowing in the wind. He is standing on a human skeleton, a snake and a kneeling devil with wings. It signifies victory over the devil and death. In one hand, he is holding a red flag with a white cross, with his other hand he is giving a blessing. Above his head, there is a large halo and the sky, in which you can see heads of angels. At the bottom part of the epitaph, there is a painting portraying the family of deceased Ján Kubíni. There are kneeling men on the left side and kneeling women on the right side of the painting. Ján Kubíni is painted in the left corner, his figure is dominant. An interesting thing about the painting is that the family members who were dead at the time of creation of the painting are marked with a cross above their heads. By the sides of the painting, you can notice coat of arms of the Kubíni family. At the top part of the epitaph, there is a relatively long inscription in Latin, which says, among other things, the following: “For the most noble man, Ján Kubíni … built by his crying and lamenting wife…).

Another rare feature are some of the pews, which come from the 16th and 17th centuries.

What is also unusual is the confessional, which is built directly into the wall. Worth attention are also the stained-glass windows with themes of St. Ján Nepomucký and the Sacred Heart of Jesus.

There is a parish building from the 17th century situated near the church. 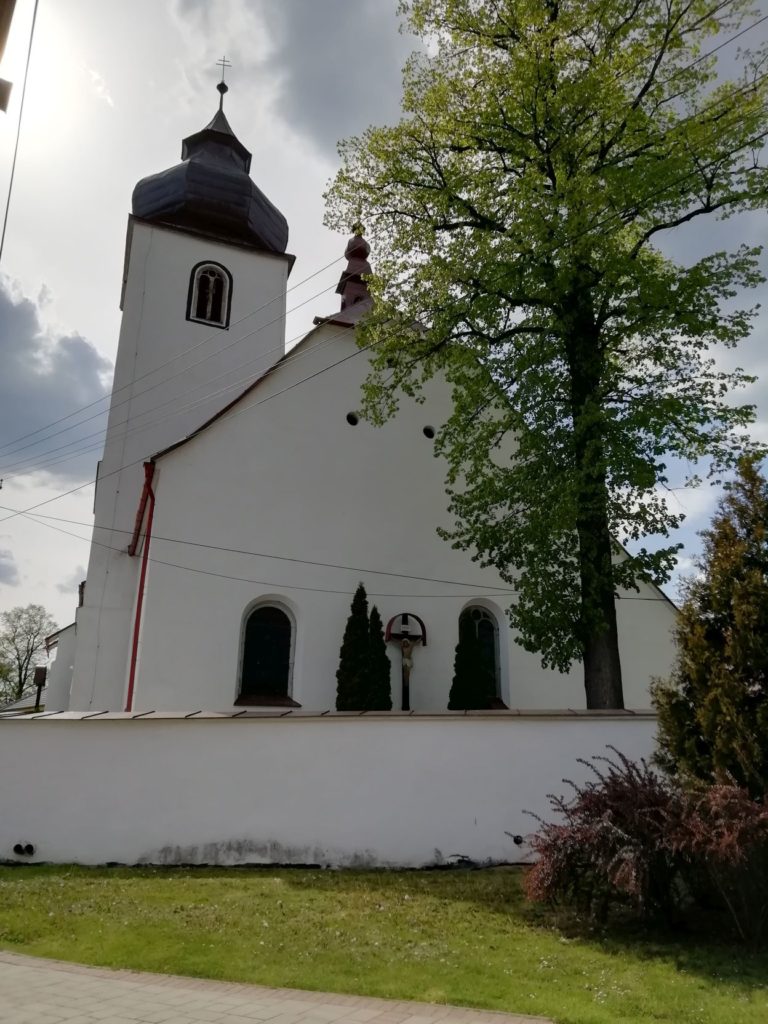 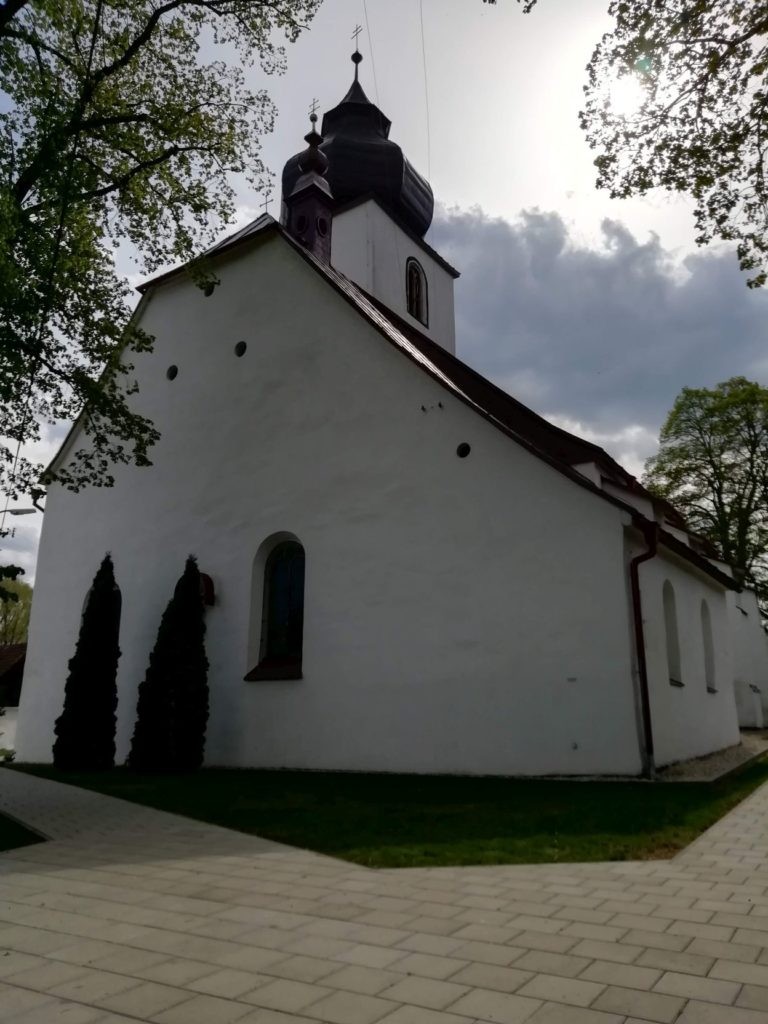 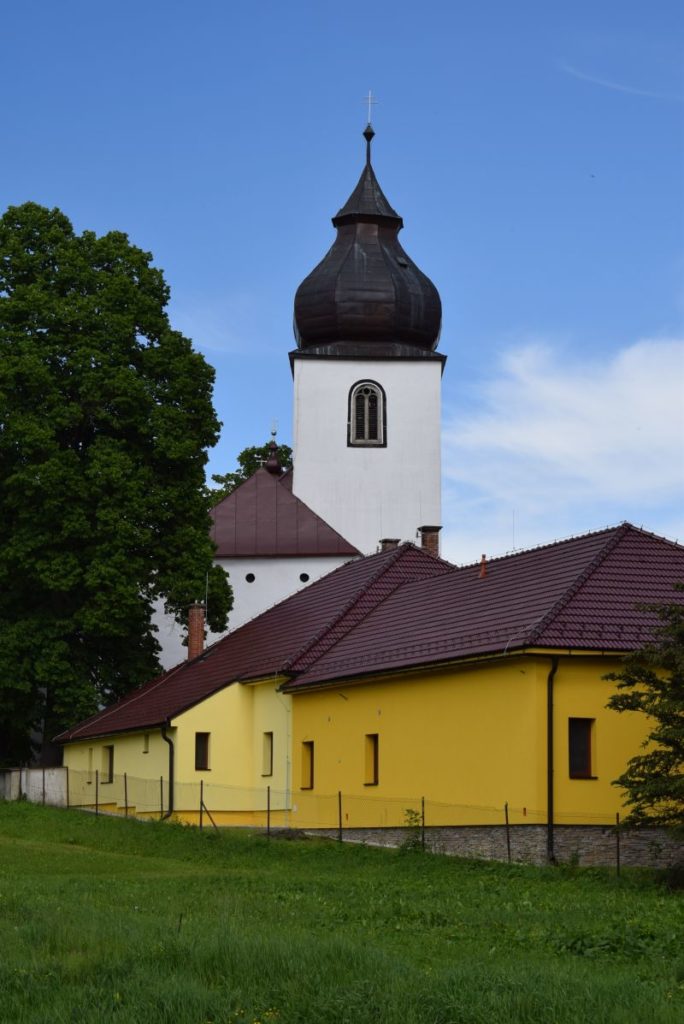