Front Choč does not belong to the locations frequently visited in winter, especially because of the less interesting route to the viewpoint, however, the view from the end of the route in good weather is undoubtedly worth the effort.

Start and destination: Likavka (parking area below the castle)
Route: 8.6 km (in total, there and back)
Estimated time: 5 hours (in total, ascent and descent)
Marking: red, back along the same route.
Vertical distance: 670 m
Difficulty level: Medium difficulty route. Depending on the weather and snow conditions, it can change to a high difficulty level. The trail to the castle is usually trodden in winter, the rest of the route is trodden only occasionally. The route includes several steep sections, which can make the ascent much more difficult in the event of a large amount of snow. There is usually a large amount of snow in the upper part of the route. There are fallen trees in the final section leading to the viewpoint, but most of them are sawn up and you can easily pass through.
Safety: Almost the entire route runs in a wooded area. The forest sloping roads on which we walk in the beginning are washed out by water, therefore you need to keep in mind that there are uneven places and craters hidden underneath the snow. In a short section after the viewpoint of the Likava Castle, there are parts of mesh material from a forest nursery left on the trail, which you cannot see through the snow. In a short section above the clearing, the path is narrow and running in a steep slope, therefore you need to avoid stepping to the edge of the path. For the most part, the steepest sections have rocky terrain, which means there is a risk of slipping. At the viewpoint itself, stay away from the slope, where you could tear off a snow drift. We recommend using hiking poles. The route is not frequently visited, which means the path is usually untrodden. In the event the weather gets worse or you run out of time or energy, we recommend turning around and going back. If you are not familiar with the route, we recommend walking it a few days after a snowfall, when it is more likely that someone has walked the route and you will be able to see the trail.

Transport:
By car: Parking at parking lots by main road E77 at “Pod hradom“ Street. (They are not always cleared from snow.)
By bus: From the bus station to bus stop “Likavka,,hrad“. The bus stop is located approximately 200 metres away from the beginning of the route. Directly from the bus stop, you need to pass in between the family houses and turn left to the bridge over the creek, where our route begins.
By taxi: Taxi from the centre of the town will cost you about 5€.

Route:
The route begins in the town of Likavka, at the parking lot at the end of “Pod hradom” Street, by road E77. At the bridge over the creek, where there is an information panel about the Likava Castle and another information panel about the town, we connect to a red-marked hiking trail, which runs from Ružomberok to the Likava Castle and then continues all the way to our destination. We cross the bridge and we continue a few dozen metres further to a place where the trail turns right in between the houses. The turn is visibly marked with trail marking and also with a small plate. The trail leads us slightly uphill, to a motorway bridge. The section under the bridge is roofed with a wooden structure to ensure safe passing under the construction area of the motorway. From the motorway bridge, we continue to an underground passage under a temporary service road for the motorway construction, after which there is a wooded area. The trail in the woods leads us mildly uphill, but there are tree roots on the trail, which are slippery and which might not be visible under the snow. The final section below the castle is steep, altered into a staircase and full of roots. Pay increased attention in this section, especially on the way down. On the road below the castle, to which we are led by the trail, there is a hiking signpost informing us that we need to go to the left. At first, the route runs on a sloping road, only mildly uphill. Later, the sloping road disappears and we continue along a trail in a valley. At the end of the valley, the trail curves to the right and it continues a bit more steeply uphill, running above a slope covered with plenty of young trees. At the end of the steeper section, there is a viewpoint, from which you get a lovely view of the Likava Castle. After a while, the trail curves to the left and continues past a former forest nursery, continuously uphill. The ascent becomes a bit less steep and we pass by a clearing, where the trail is very narrow and cut into the slope. Continuing mildly uphill, we will arrive at a small meadow, where the trail makes a sharp turn to the left. We continue steeply uphill in a narrow rocky channel. After a bit more demanding uphill section, we are entering the upper part of Front Choč, where the trail leads us mildly uphill to signpost “Pod Predným Chočom“ (below Front Choč), where there is no arrow to the viewpoint, but the marking on trees consisting of a red triangle on white background will easily guide us all the way to our destination, to the viewpoint. The viewpoint offers lovely views, in particular of the Great Fatra and the Low Tatras, with the Liptov Basin and Ružomberok below them. After soaking up the views, we use the same route to return to where we began.

Notes:
– In the vicinity of the beginning of the route, there is a restaurant.
– During winter months, the Likava Castle, which we pass by on the way, is closed and not accessible.
– Along the route, you will see many wooden arrows showing direction, which will often help us, but sometimes they will confuse us too.
– Situated at various places along the route are wooden benches, which are usually barely visible in winter.
– The route is situated in the Choč Mountains.
– The marking on the route is decent for winter conditions as well, however, you need to look for it at some places.
– There is a sitting area at the top viewpoint, but it is often completely covered with snow.
– If you want to, you may sign your names in the hikers’ book at the viewpoint.
– Along the route, there are quite a few fallen trees, but you can easily get around them.
– The route is not very suitable for passing with skis.
– In the event the snow is hard and slippery, we recommend using crampons (climbing irons or shoe chains). 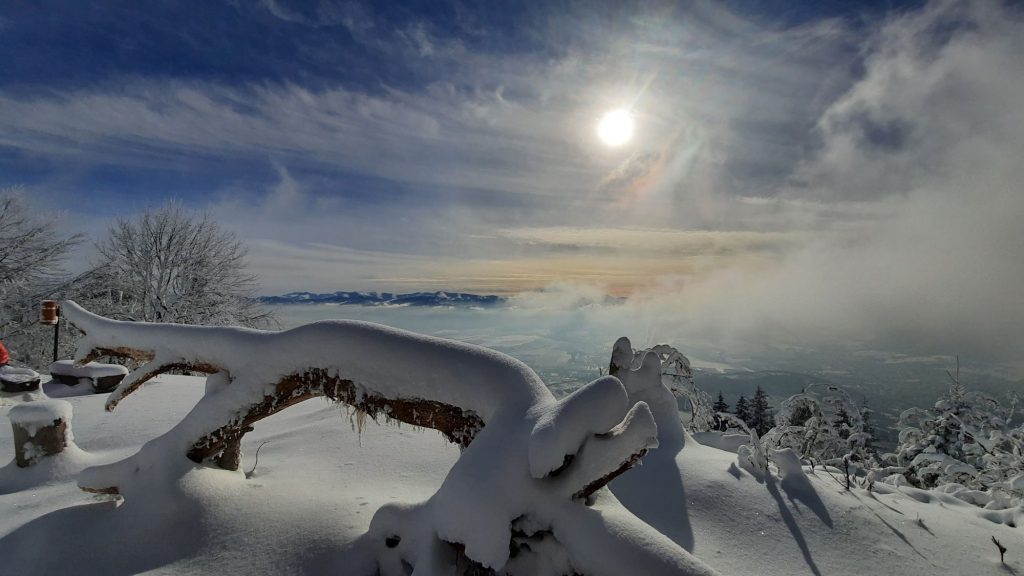 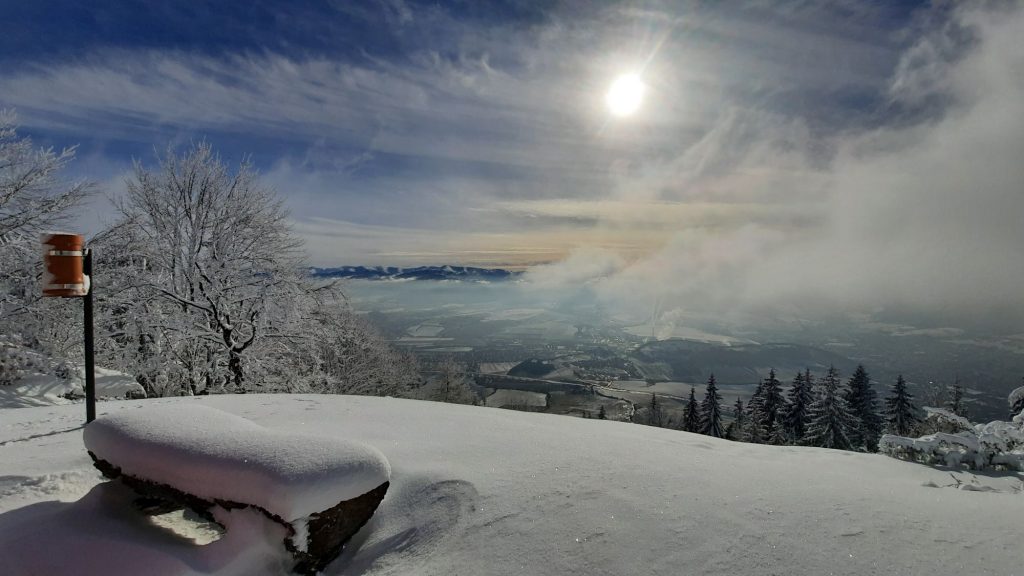