The hike to Malý Salatín is one of the undiscovered, medium-difficulty routes. As the route is new, it provides access to areas which are not well-known.

Start/Destination: Liptovské Sliače – Vyšný Sliač (bus stop ”Lipt.Sliače,Vyšný Sliač,garáž“)
Route: 18 km (in total, there and back)
Estimated time: 5:30 hours
Marking: Blue hiking trail mark.
Vertical distance: 900 m
Difficulty level: The route belongs among the medium-difficulty ones, in particular due to the large vertical distance and the less trodden trail. The terrain is diverse, from muddy sections and rocky areas, through wood paths, to sloping roads. The final climb to the peak is secured with steel chains.
Safety: A large portion of the route consists of forest sloping roads, which include sections full of rocks loosened after mining, which are unstable. The final section of the route runs on wood paths, where you might sometimes need to step over obstacles or plan your steps. This part of the route is often covered with growth and moss, which is slippery in damp weather, especially on the way down. The section of the ascent to the top is secured with steel chains, as this short section consists of slippery and steep rocky terrain. On the south side of the peak, there are cliffs, which are not secured with railing. The rocky viewpoints along the route are not secured either. The route is not suitable for children under the age of 7.

Transport:
By car: Parking in the town is possible near the bus stop at guest house Prameň or by the local refreshment establishment and grocery store.
By bus: From the bus station in Ružomberok to bus stop ”Lipt.Sliače,Vyšný Sliač,garáž“
By taxi: Taxi from the centre of the town to the beginning of the route will cost you about 15€.

Route:
We begin the route in Vyšné Sliače by bus stop “Lipt.Sliače,Vyšný Sliač,garáž“. We walk uphill along the main road towards the local grocery store, at which there is a tourist signpost titled “Vyšný Sliač”. From the signpost, we follow the blue-marked hiking trail, which is going to lead us along the entire route, all the way to the top of Malý Salatín. After a few metres from the signpost, the route turns right to a side street. The street will lead us below the Church of Two Hearts (“Kostol Dvoch Sŕdc”), which is an unusual architectural piece. From the parking lot below the church, the blue marks will lead us to a field road, which leads us behind the yards of the family houses, to another street. After passing by a few houses, the road changes to a field road, which leads us under the high voltage line, to a wooded area, where we see a hiking shelter with a sitting area and a fireplace. While we are resting at the shelter, we can enjoy the views in particular of the Choč Mountains and the West Tatras, which are partially covered by the cables of the high voltage line. In the vicinity of the shelter, there is a signpost titled “Pod Kršiakom“, which will navigate us to the right sloping road in the woods. The sloping road, which is a bit broken up after excavation, runs uphill in the woods and it splits into branches a few times. All the places where the road splits are well marked and it is not difficult to choose the correct path. Whenever you are not sure, you always need to choose the right one and never one of those which run downhill. After a long uphill section, we arrive at a small meadow, where we see a cross in a frame and a sitting area situated by a tree on the left of the trail. A few metres away, there is an animal feeder situated below the trail on the right. At the end of the meadow, we can look back to get a partial view of the Choč Mountains and Liptovská Mara reservoir, with the West Tatras in the background. The path through the woods leads us to a forest meadow called Vidovô, where we see a signpost with the same name. Here, the ascent becomes a bit milder and we continue through a more relaxed uphill section. At the place with felled trees, on the right of the road, we get a partial view of the Great Fatra and the Small Fatra, with dominant Great Choč next to them. The road will lead us to an elongated meadow with an animal feeder, a cross and a hiking shelter. At the shelter, we will see another signpost with the information that we are at Sliačska Magura. However, we already passed below its peak from the right side a bit earlier. The right arrow by the shelter tells us that there is a well with potable water situated nearby, to which we can make a detour, if we need water. The detour to the well takes approximately 10 minutes in total, there and back. While sitting in the shelter, we can enjoy a partial view of the West Tatras. We continue uphill past the shelter, on the side of which we can read brief information on the National Nature Reserve of Salatín. After a short uphill section, at the place with felled trees with a view of Great Choč, the trail turns to the left and we continue along a traversing path cut into the slope below peak Chlopec. In the small notch at the end of the traversing section, there is a frame carved out of wood located on a tree, with a statue of a saint in the frame. This is the place where we enter the Salatín Reserve. The path in the woods becomes sinuous and it leads us to a steeper section, where it turns to the right and subsequently to the left. It continues through a wooded area with thick growth and a lot of fallen trees, through places which are, fortunately, cleared for passing. The trail with closely spaced marks will lead us to a small meadow, before which there will be a right-hand arrow showing us the right direction. After walking up to the mentioned meadow, we continue further a few metres to a place where we pass through trees and come to a viewpoint. Situated at the viewpoint are two wooden benches, on which we can rest and admire the view of the Low Tatras. We return to the meadow and continue in the direction that was shown by the arrow. The trail leads us past a mud swamp frequently used by woodland animals, where we can see many different footprints. The final section leads steeply uphill through thick woodland. At some places, the path is covered with growth and moss. At the place with a wooden bench, we will find a rocky viewpoint, consisting of a ledge on the cliffs of the southern slope. After a few metres, the trail will lead us to a rock covered with mountain bushes, which is the peak of Malý Salatín. The climb to the rock is facilitated with a chain, which ensures a safe climb to the top. At the top, there are direction signs and a wooden bench. The top offers a view particularly of the south, of the Low Tatras. After admiring the views and resting, it is time to go back along the same route we used to get to the top.

After finishing the route, we can use the services of the local refreshment establishment or the guest house.

Notes:
– In the vicinity of the beginning / end of the route, there are refreshment establishments, accommodation facilities and a grocery store.
– The route is situated in the Low Tatra Mountains.
– The route runs through the territory with the highest level of protection.
– The trail was marked in 2018.
– By the cross at Sliačska Magura, they organize an annual holy mass as part of a pilgrimage.
– In the vicinity of the beginning of the route, there is a mineral spring and a travertine crater resembling a volcano. You can get there along a blue-marked trail in the opposite direction.
– If you want to visit the route during winter, we recommend participating in the annual winter hike on Saint Stephen’s Day (December 26).
– For those who are interested, we recommend continuing from the peak to the notch below Malý Salatín (“Sedlo pod Malým Salatínom”), from where you get lovely views of the rocky terraces of Malý Salatín, which are not visible from the peak. The detour to the notch takes approximately 25 minutes in total, there and back.
– The village of Liptovské Sliače is well-known for its folklore and it is the largest village in Liptov.
– There is a church in Liptovské Sliače (Stredné Sliače), which is decorated with a fresco that used to be depicted on the one-thousand Slovak Crown bill. The fresco is located in the section of the church which is not accessible to visitors. 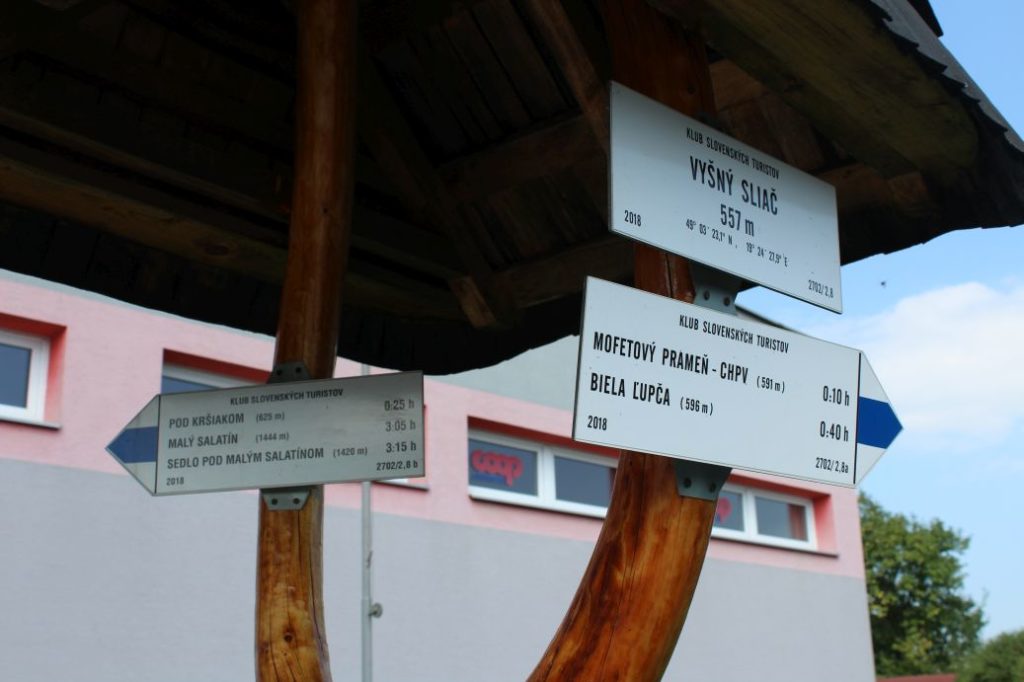 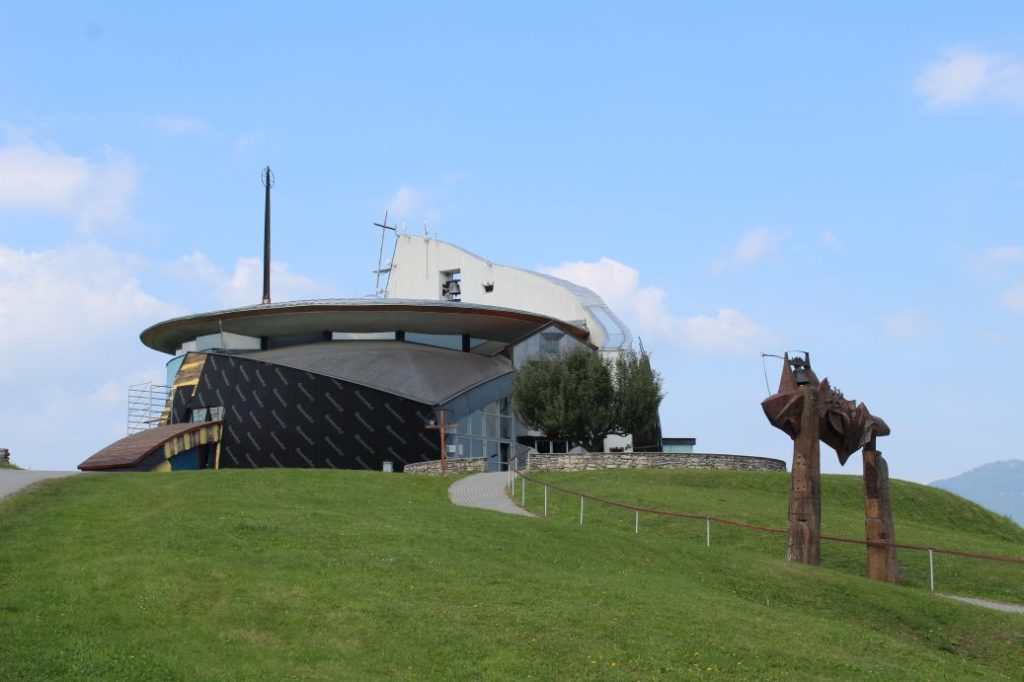 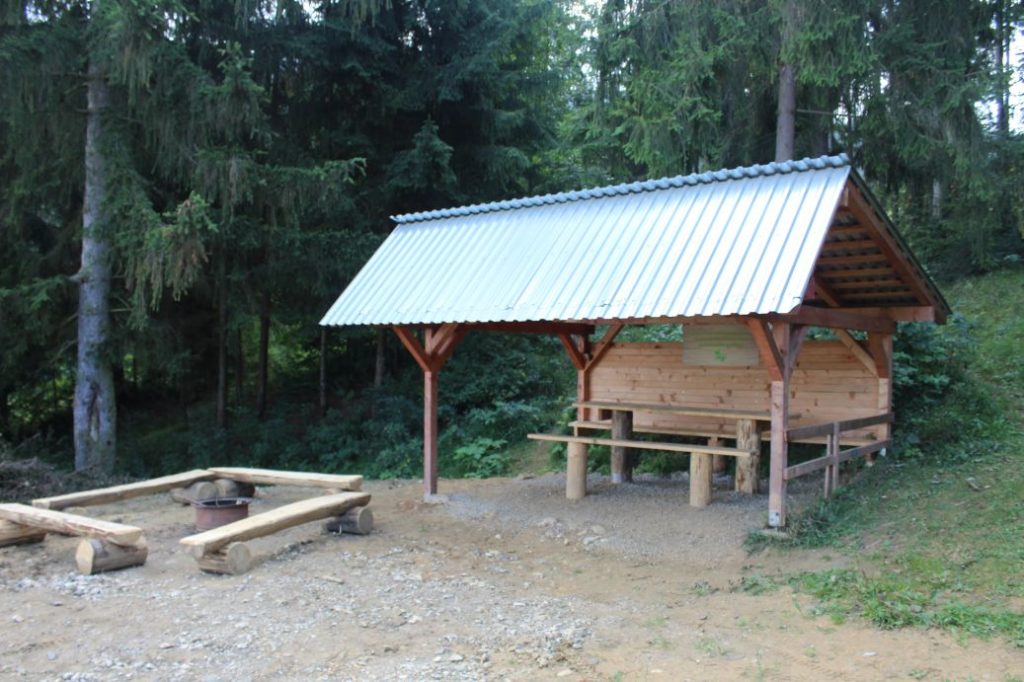 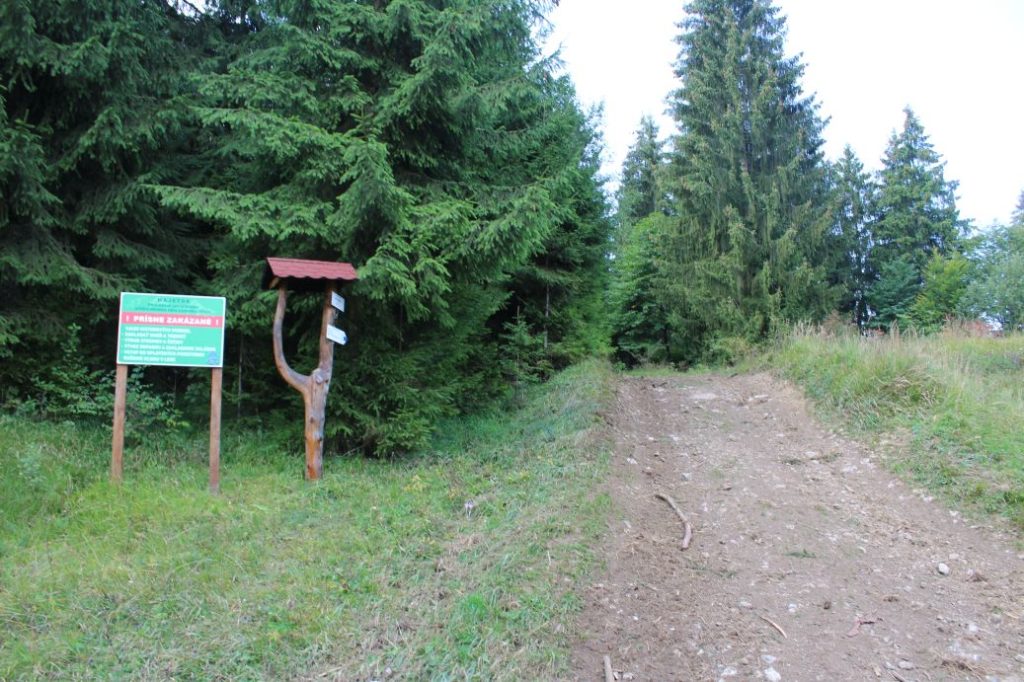 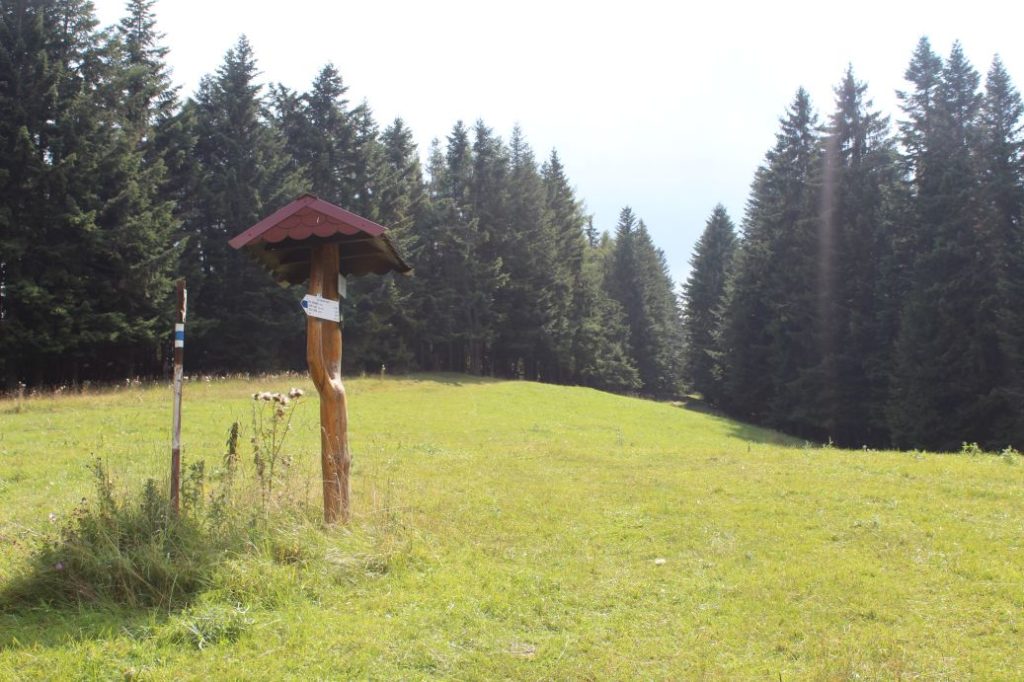 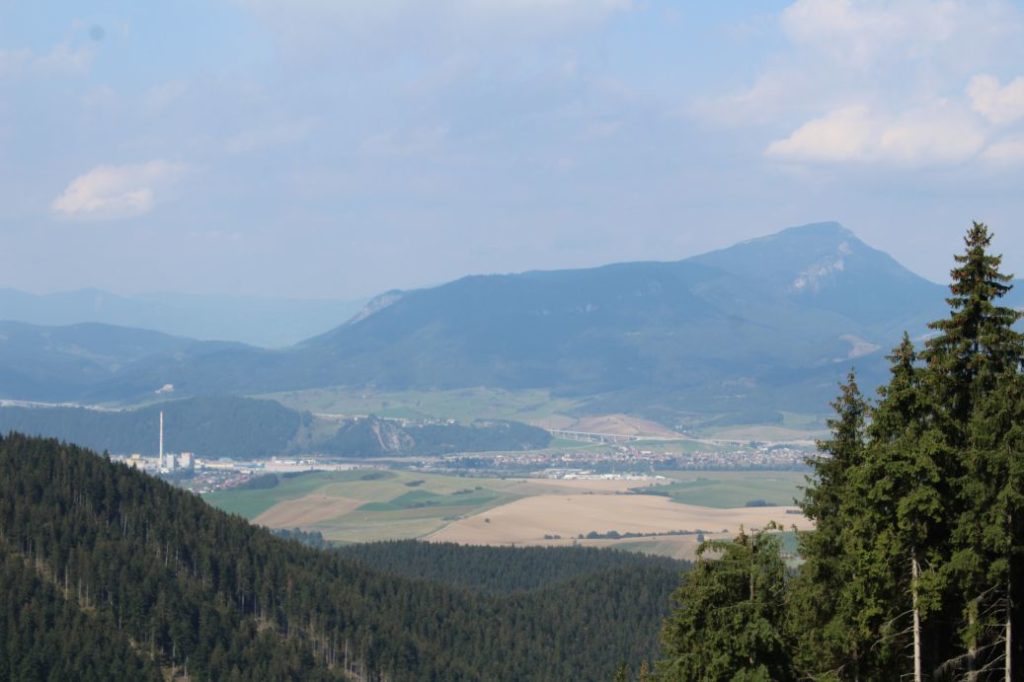 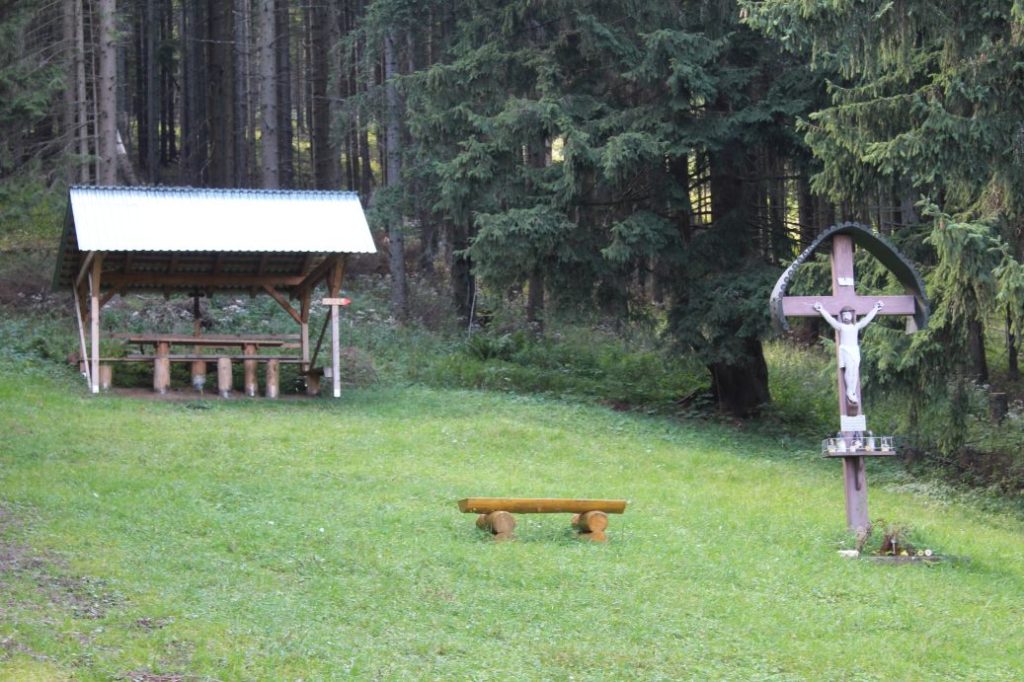 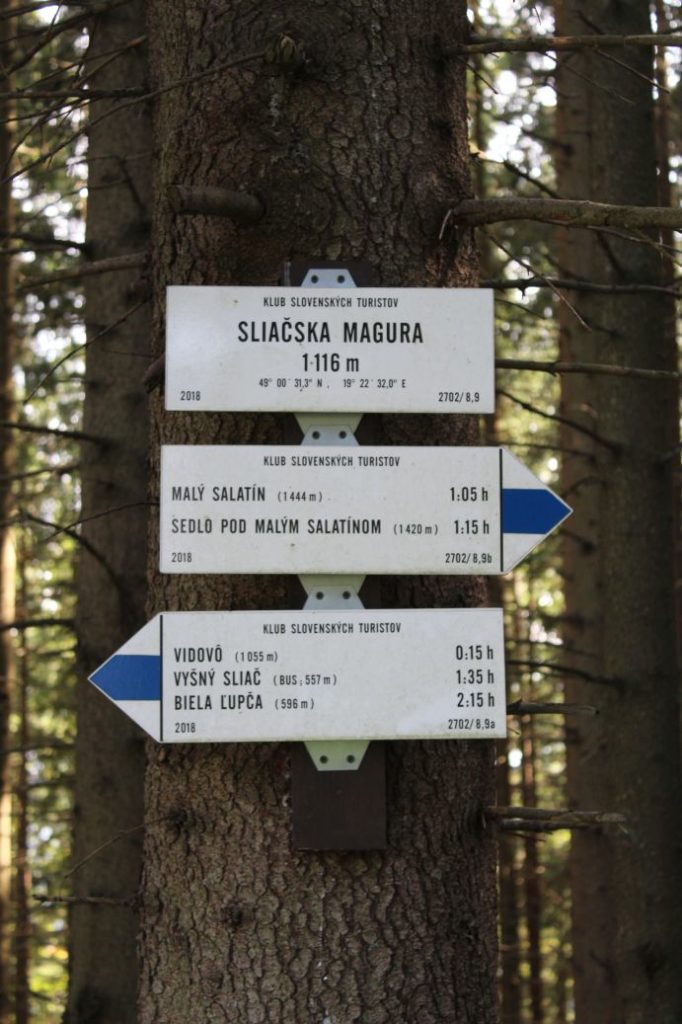 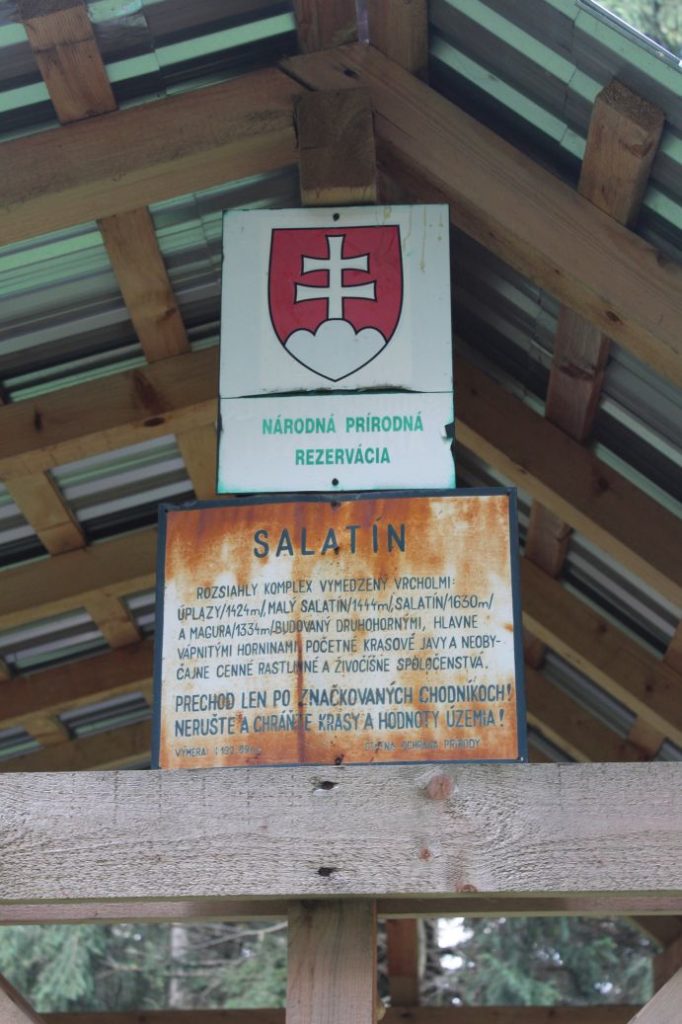 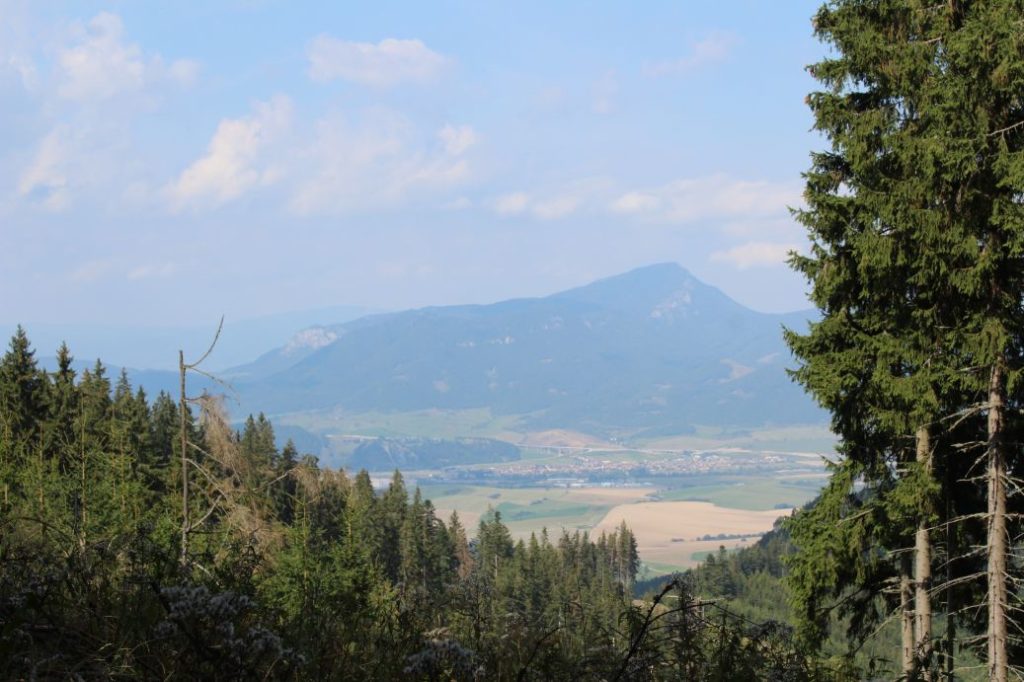 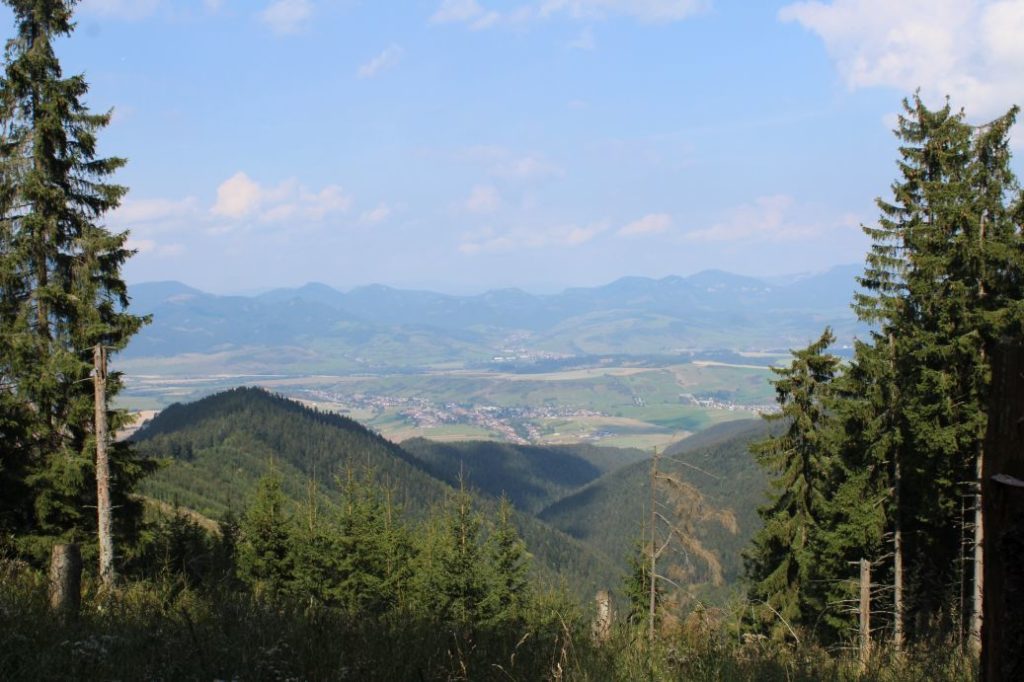 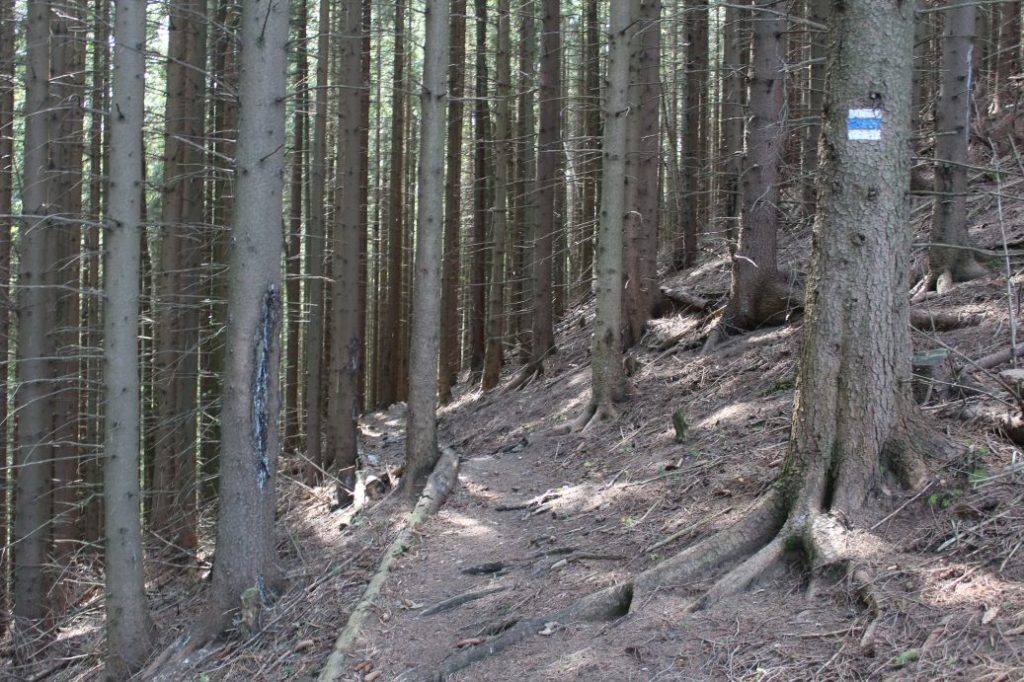 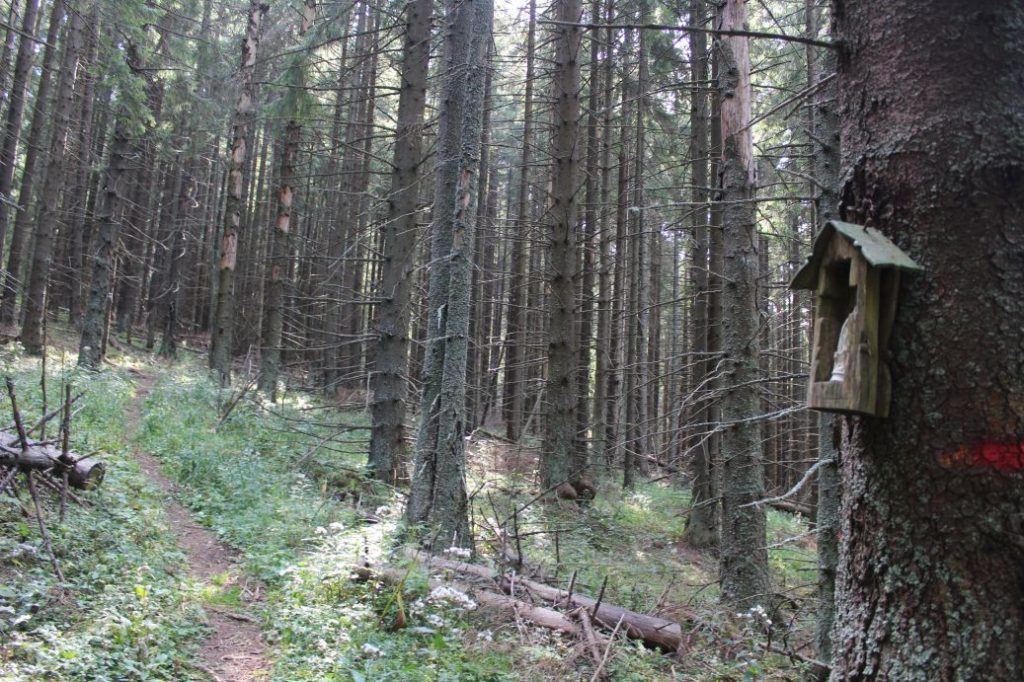 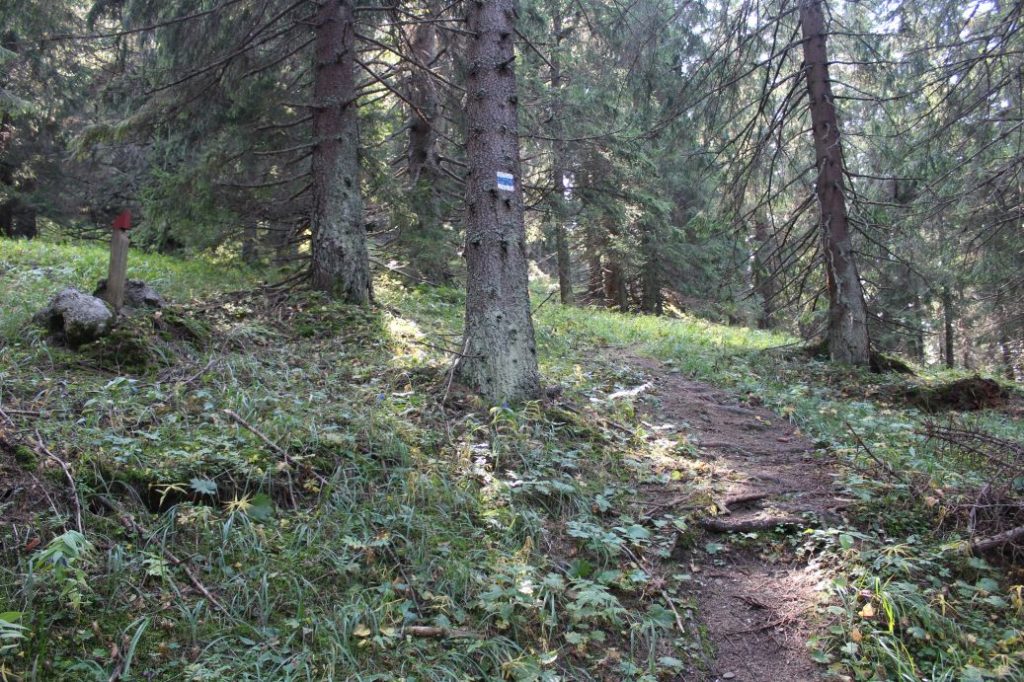 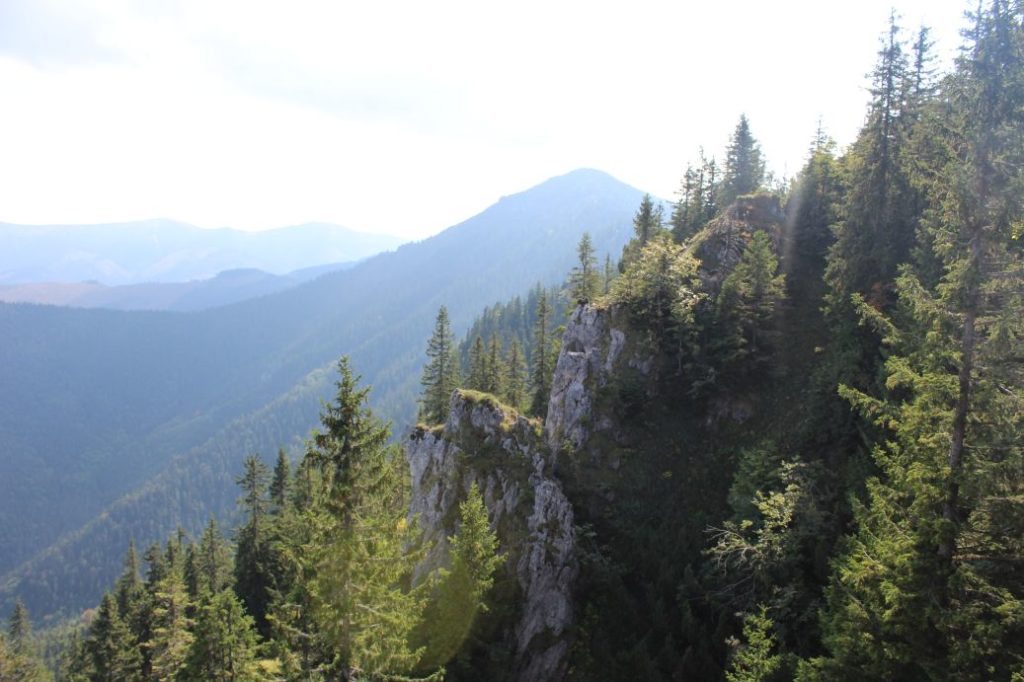 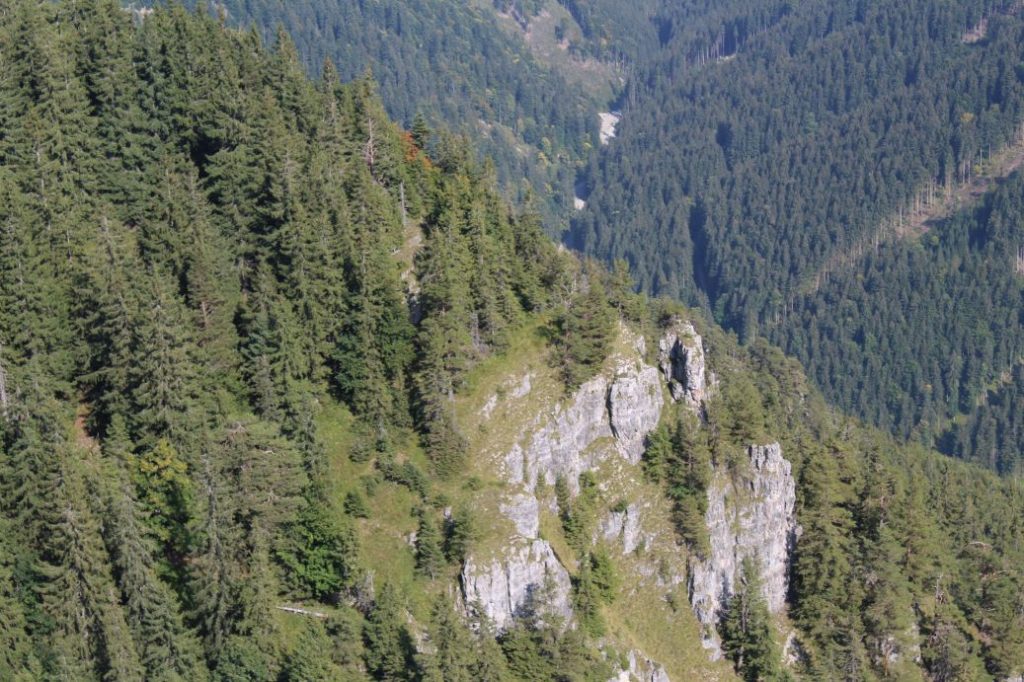 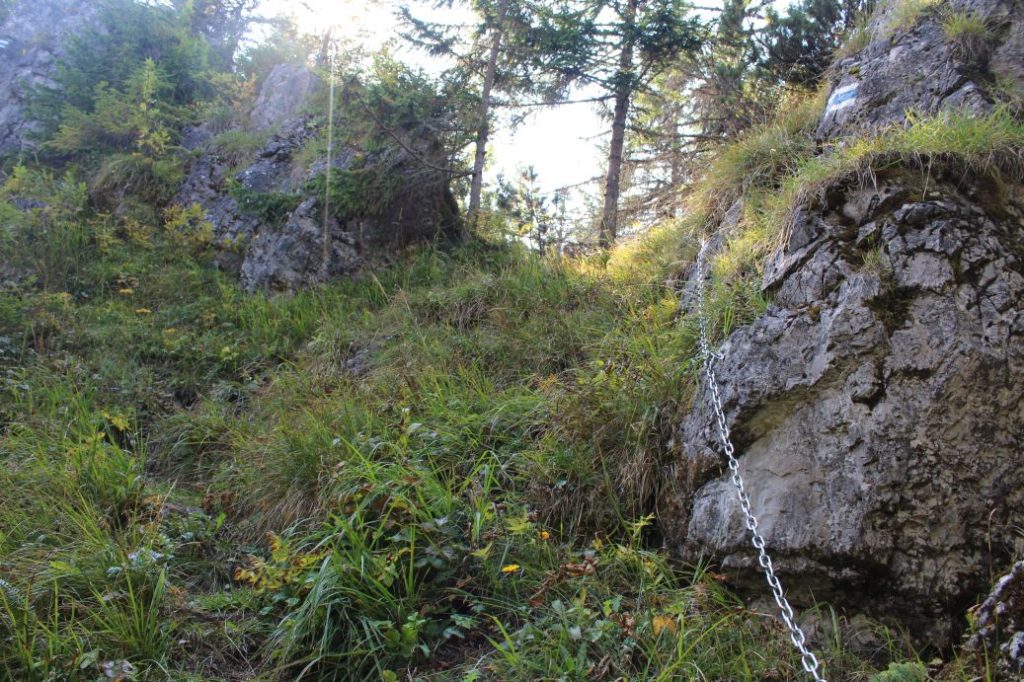 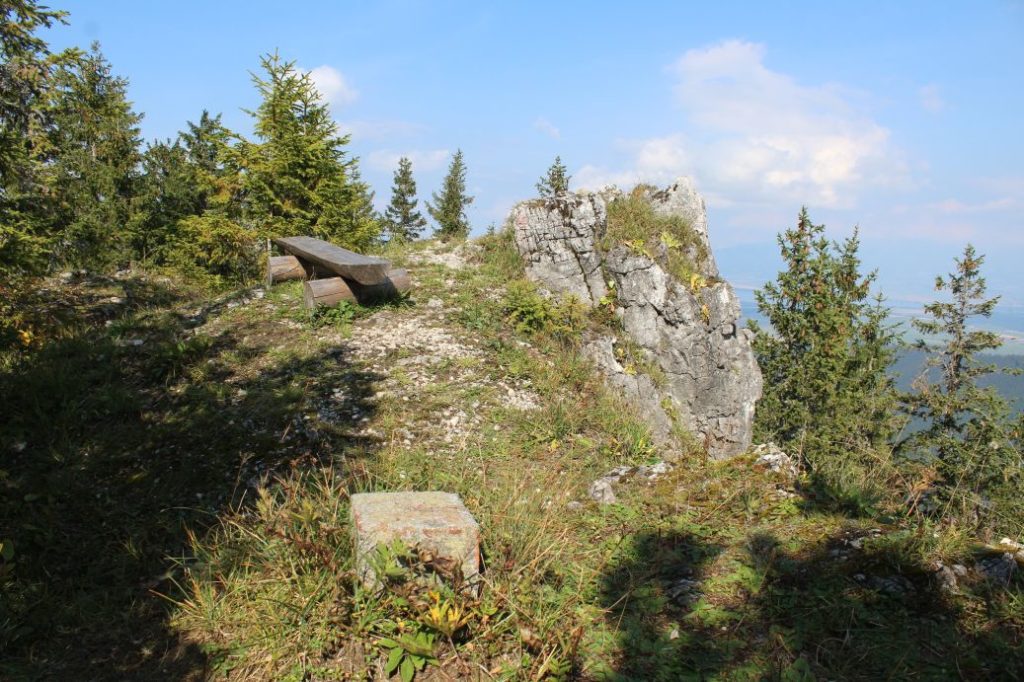 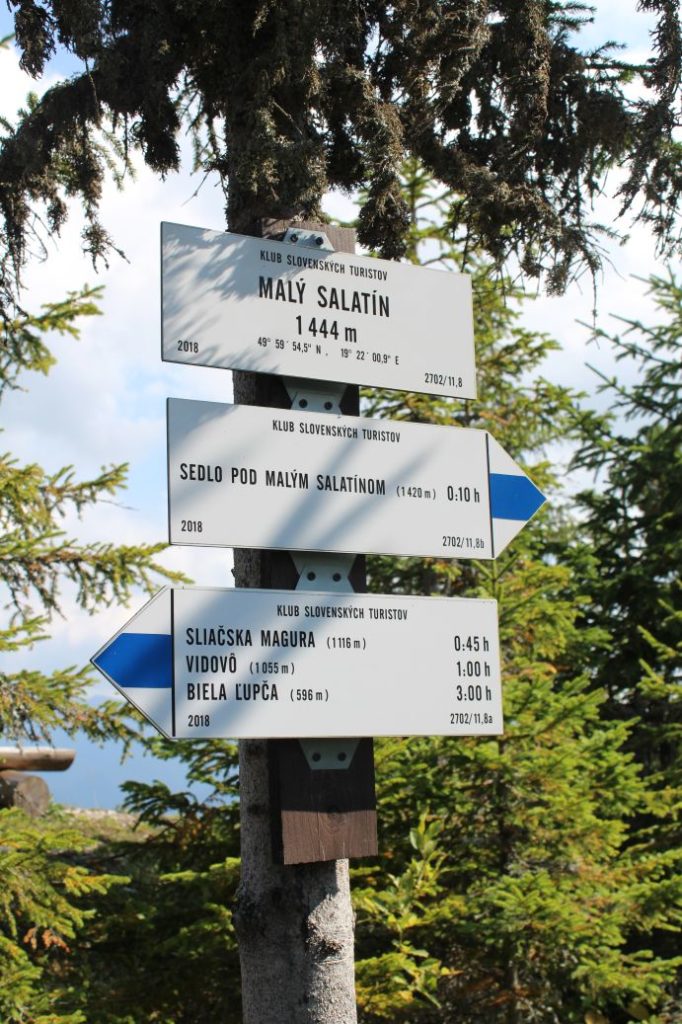 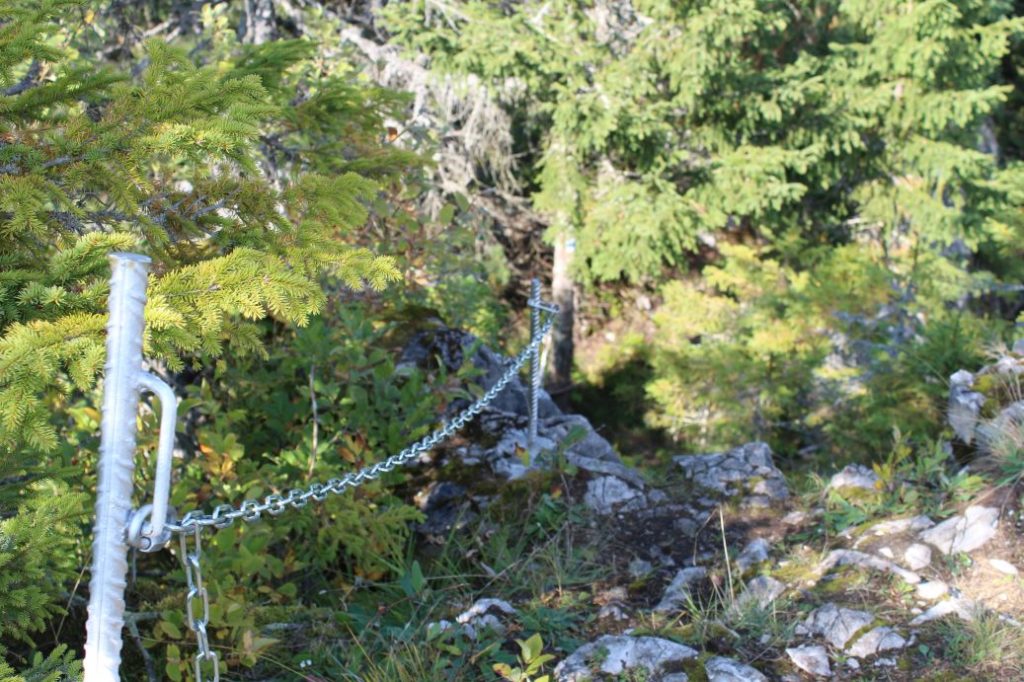 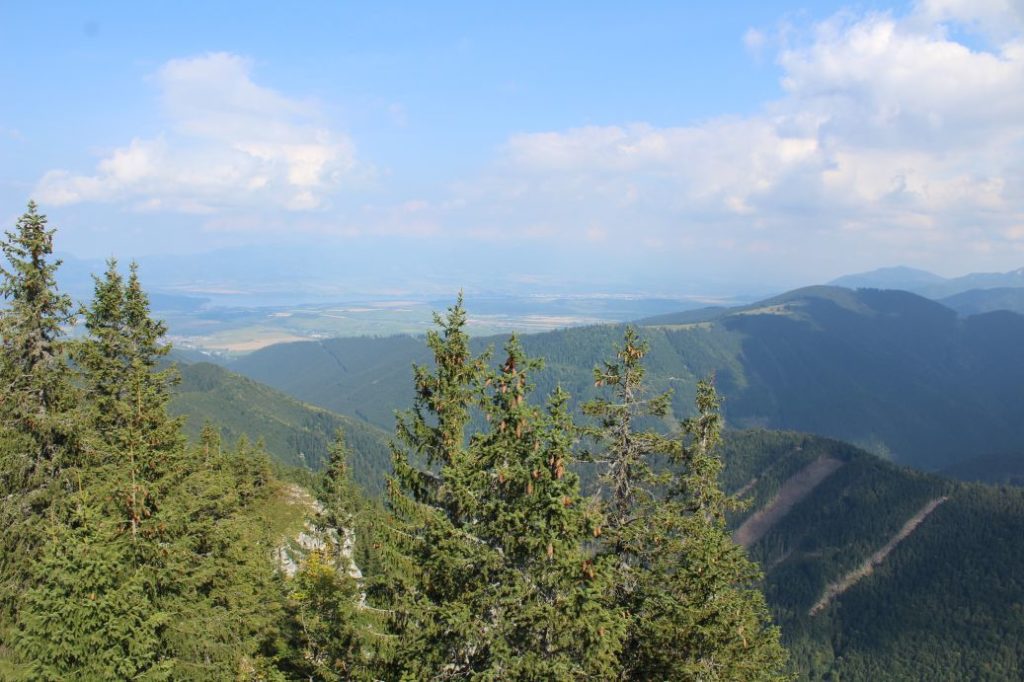 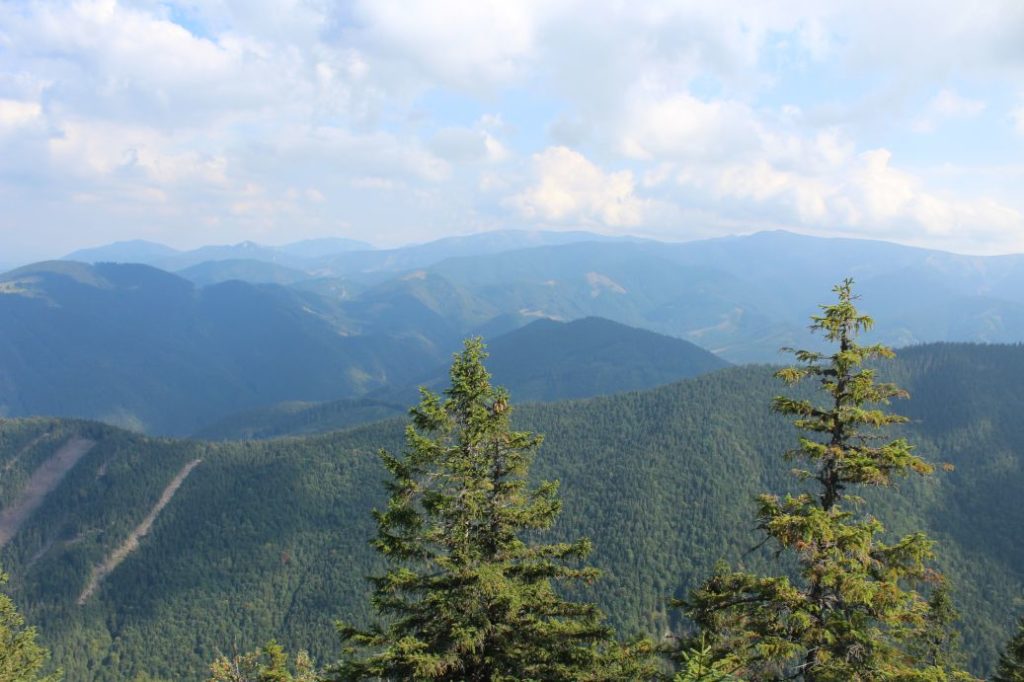 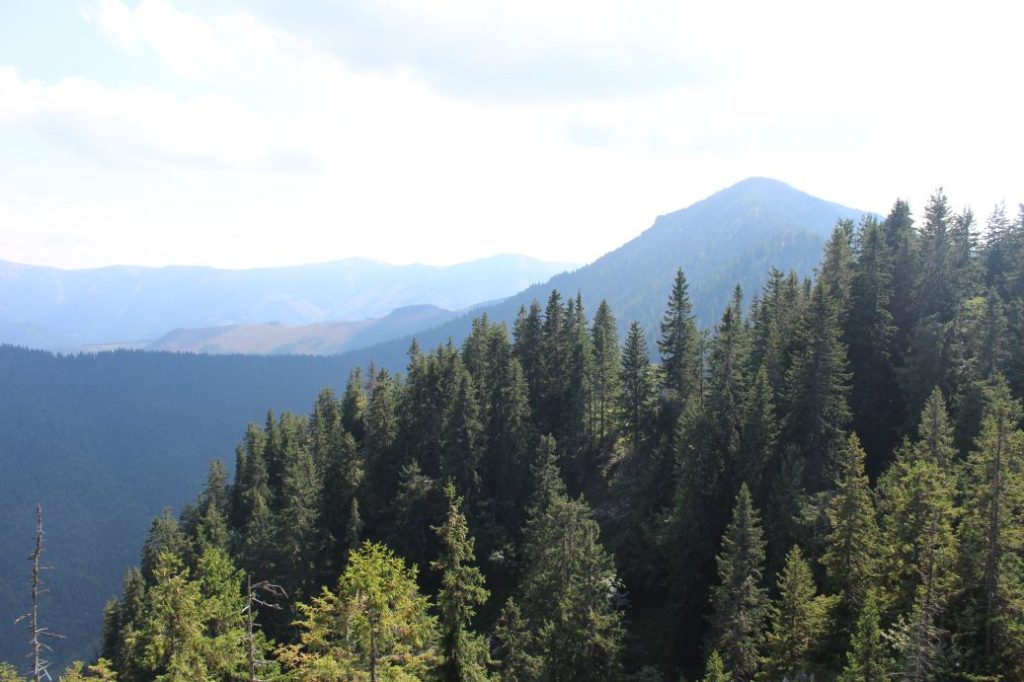