To the border of four town areas

A trip to a viewpoint at the border of four town areas. A moderately demanding route will reward you with many views of the surroundings and an interesting wooden tower at the end of the hike.

Start: Komjatná (bus stop “Komjatná,,Pod Stráňou“)
Destination: Komjatná (bus stop “Komjatná,,ZŠ“)
Route: 5.5 km (in total, there and back)
Estimated time: 2:00 hours (to the tower and back)
Marking: No marking.
Vertical distance: 150 m
Difficulty level: Moderately demanding route, mildly rising, mostly on unpaved roads and meadows. In damp weather, the route is usually muddy. It is suitable for all age categories.
Safety: At the beginning, the route runs on low-frequented local communications, which are also used by agricultural machinery. Majority of the route runs on field roads, which are unpaved and slippery in damp weather. There are cyclists passing through at the end of the route.

Transport:
By car: Parking on the side of the road, in the vicinity of the tourist signpost (by the school, by the grocery store).
By bus: From the bus station to bus stop “Komjatná,,Pod Stráňou“.

Route:
The route begins in the village of Komjatná, by tourist signpost “Komjatná 593 m“, opposite bus stop “Komjatná,,Pod Stráňou“. As the route is not marked, orientation might be a bit more difficult, but not too complicated. From the signpost, we go slightly uphill, to the street which is not pointed to by any of the three signpost directions. We are passing by a cosy small wooden house, after which the road curves to the left and continues with a steep but short rise to the periphery of the village, where you can see a wooden cross, and a few meters behind the cross, also a brick chapel. We can make a short detour to the chapel. Then we continue on the asphalt road to the right, slightly downhill through the fields, towards the farm. In the section from the cross, the route starts revealing the first views of the surroundings. No attentive eye can miss the interesting rock formation in the woods on the right, the name of which, “Hlavačka”, does not make one think about the reason for such name. At the nearest intersection, we turn left onto a paved road, still running slightly downhill. We will arrive at an intersection, where we go neither right nor left, but we continue straight up across the meadow on a field road, or on the side of the road. The road curves slightly to the right and it will lead us up to the ridge. Our pathway is defined by the high voltage line, which serves as our reference point. As we get higher and further away from the village, the views get better and we can see more and more of what is situated in the surroundings. There are several smaller paths on the ridge, running by the bushes from left and right. It does not matter which path we choose, there is only one rule, we need to continue along the ridge. We pass underneath the poles and we continue along the ridge in the direction of the poles, which, however, now continue below the ridge. We can already see a small building in the distance, situated below a wooded hill rising above the building. We continue along the slightly rising ridge towards the wooden building. A few metres before reaching the building, we can notice a wooden bench below the bushes on the right, from which we can get a view of Great Choč. Situated by the tower building made of wood, which resembles a bell tower, is a wooden cross and a sitting area. The tower building is located approximately 150 metres away from two points (one is on the east side, the other is on the west side) which mark a meeting place of three town areas. If we squint our eyes a little and connect these points, we will get the border of four towns (Komjatná, Žaškov, Jasenová and Oravská Poruba). At this meeting place of four town areas and from other locations in the vicinity, you can see the peaks of Ostré, Hrdoš, Kečka, Kútnikov Kopec, Kopa, Šíp, Poludňový Grúň, Osnica, Stoh, Veľký Rozsutec, Kubínska Hoľa and many other distinct or less distinct peaks. After a short rest, we return along the same route. From the bus stop where we began the route, there are no buses running in the direction to Ružomberok, therefore we need to continue from the signpost along the red-marked hiking trail to the right (the direction to Švošov), to a bus stop located approximately 200 metres away, by the school, where we will end our trip.

Notes:
– The route can be visited all year round.
– In the vicinity of the beginning of the route, there is a grocery store.
– There are no springs situated on the route.
– The route is situated in “Oravská Vrchovina” (the Orava Highlands).
– Passing by the tower is a blue-marked bike trail to Jasenová and to Žaškov. 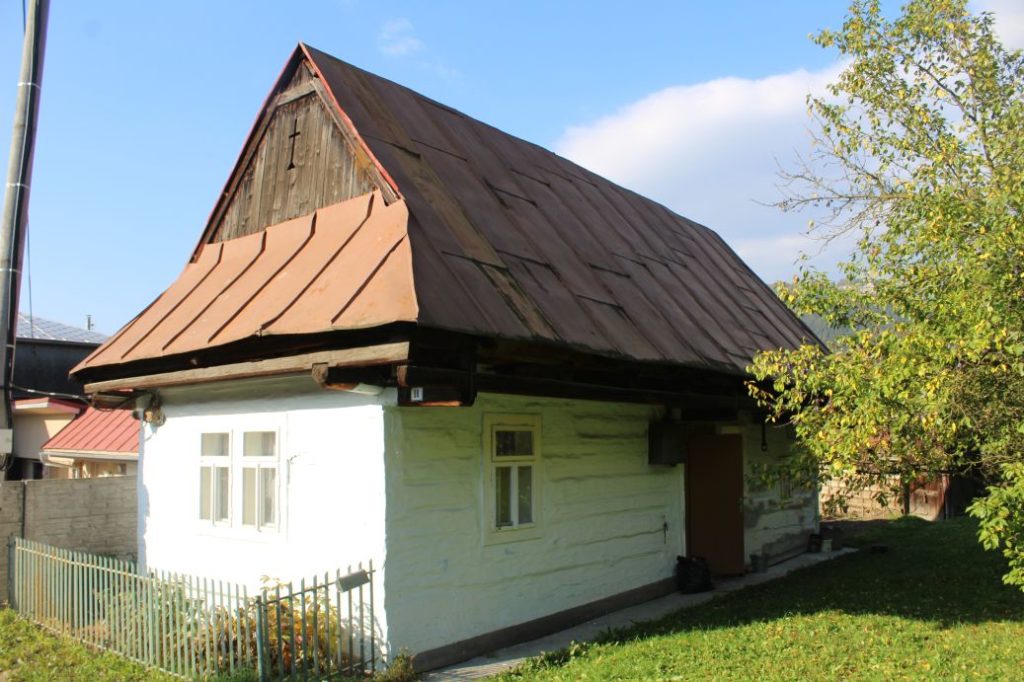 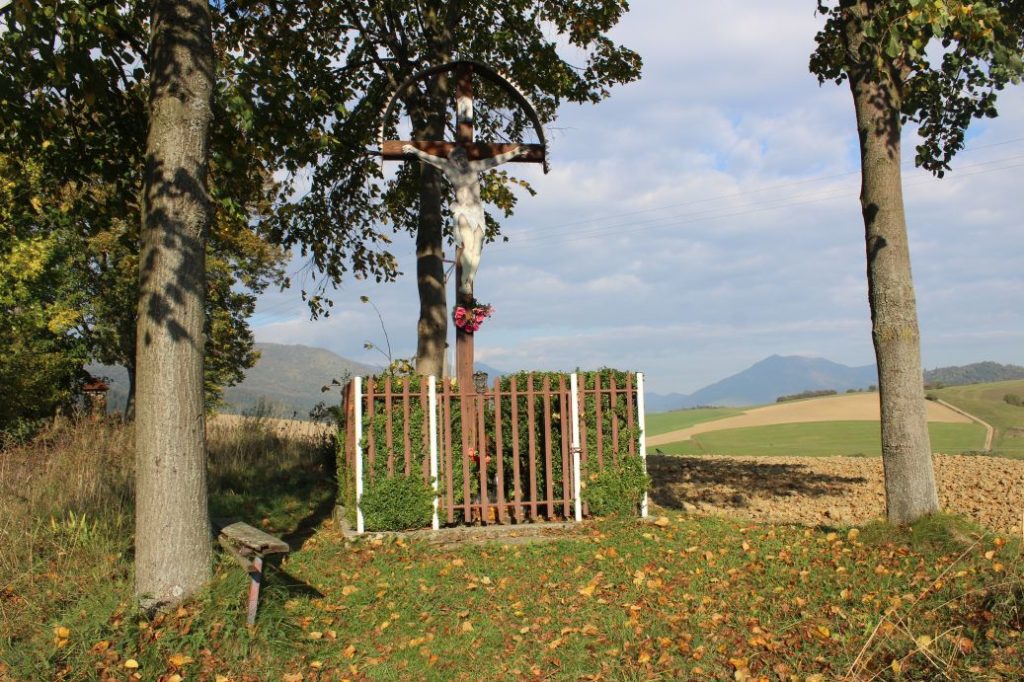 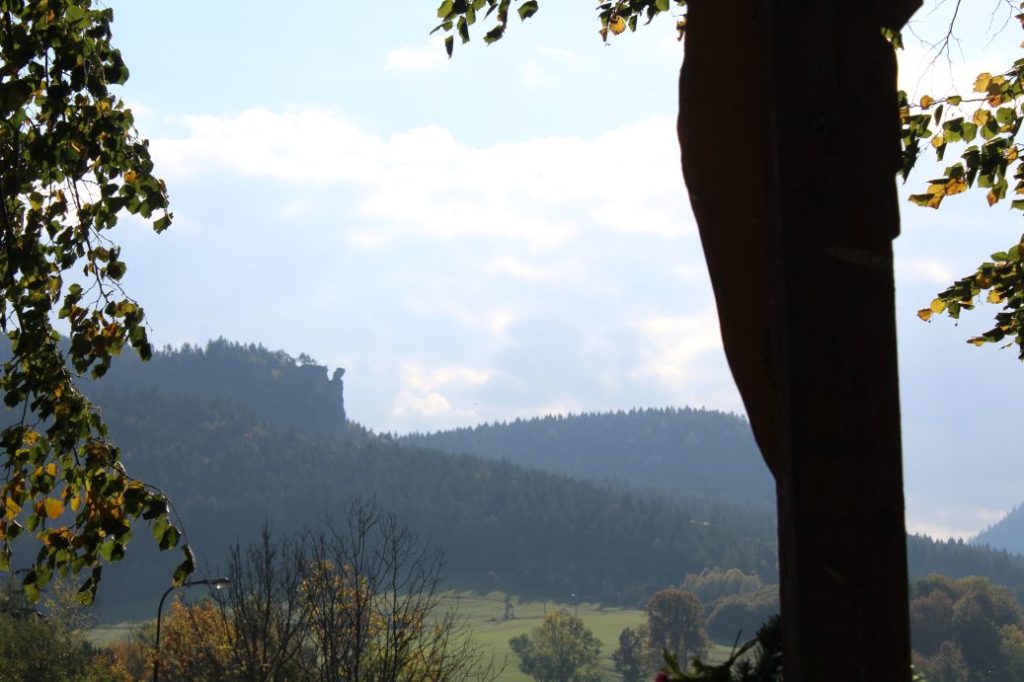 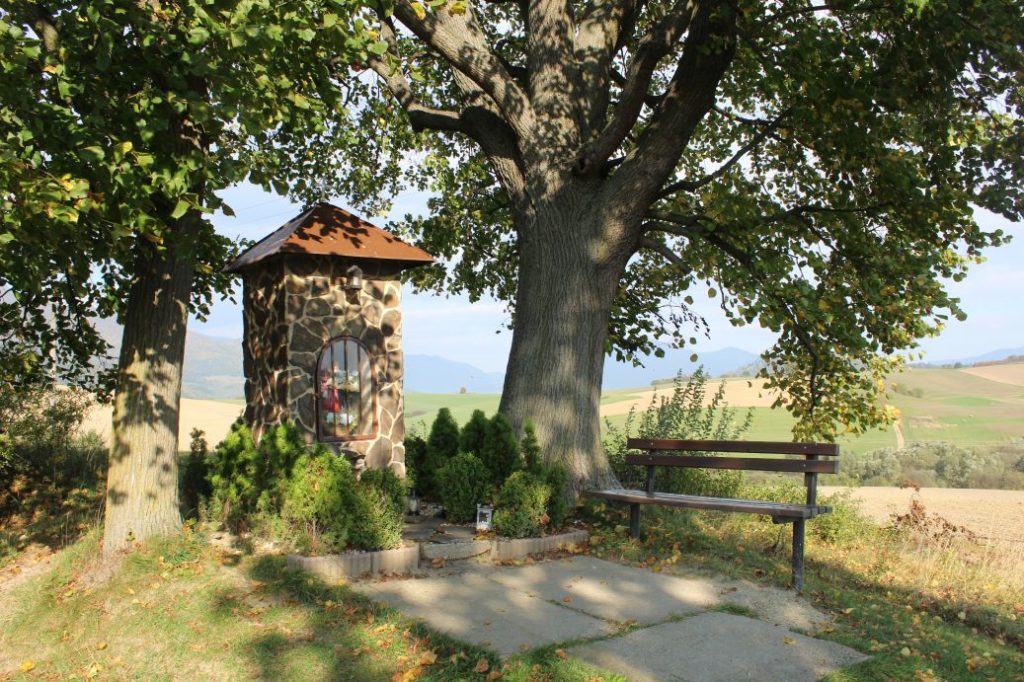 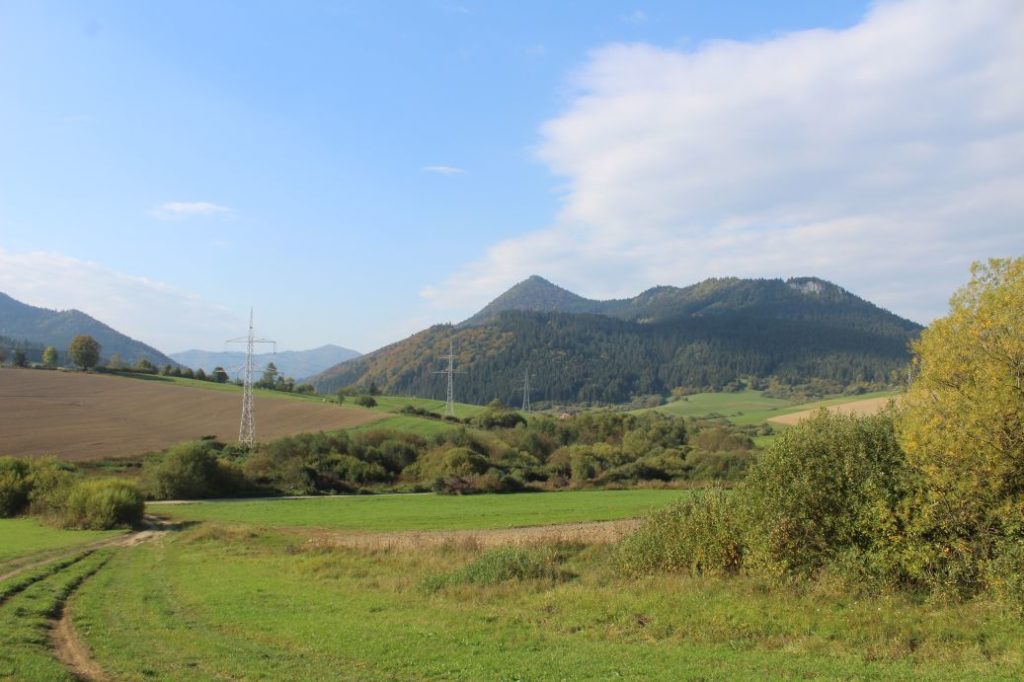 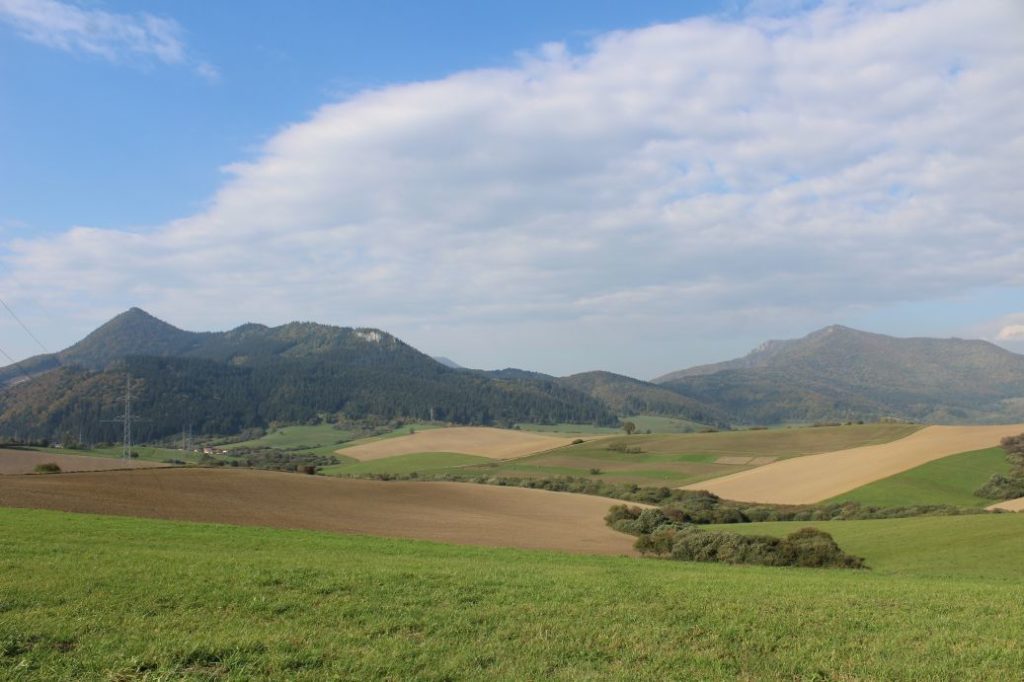 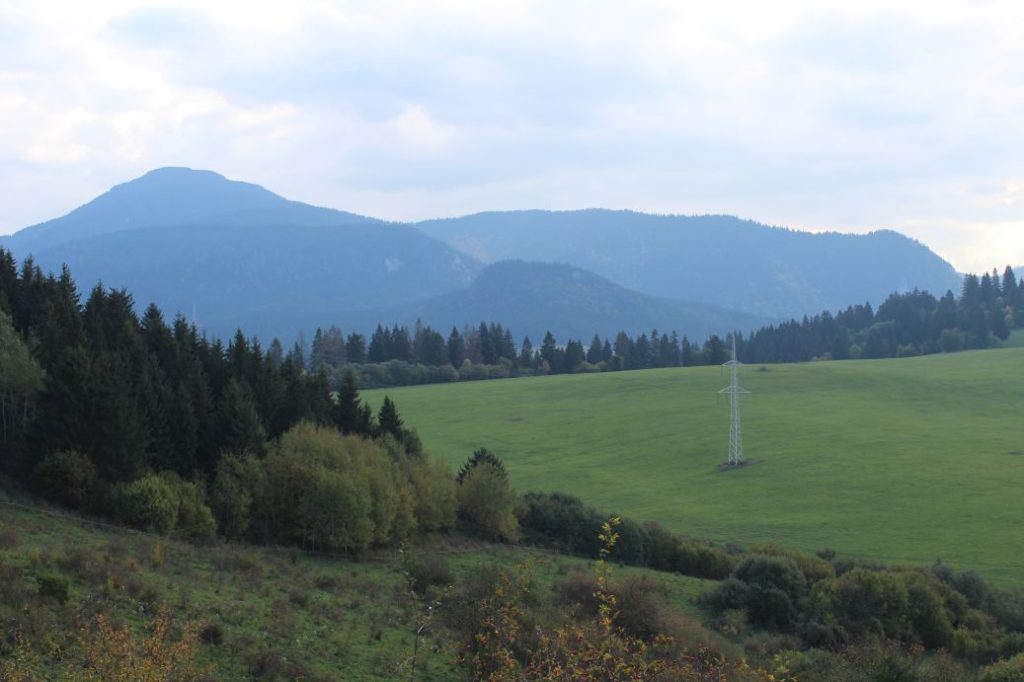 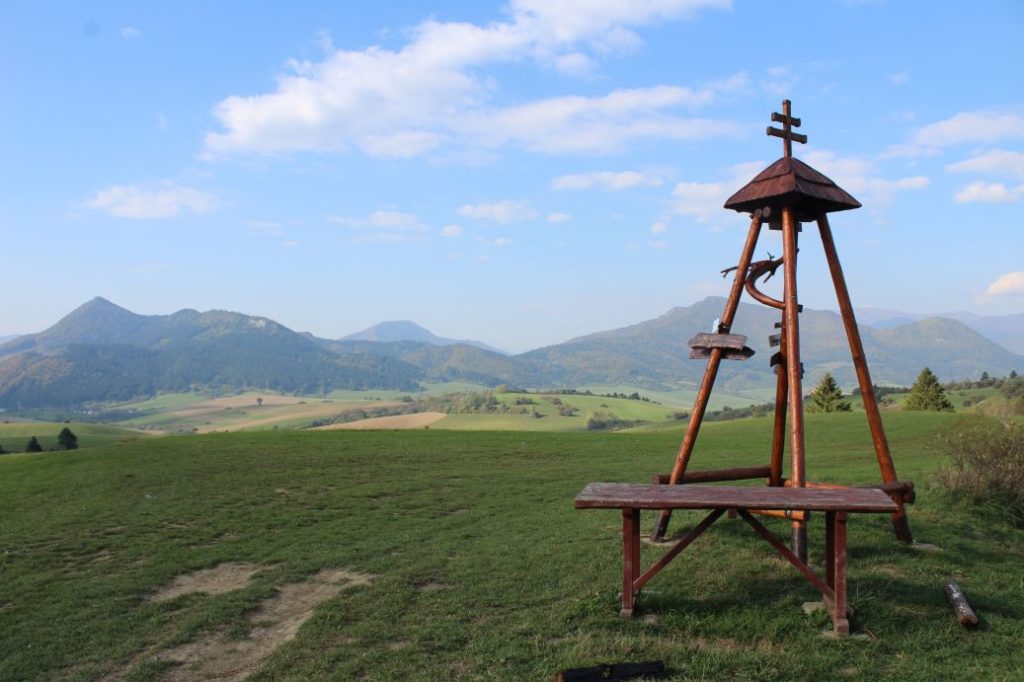 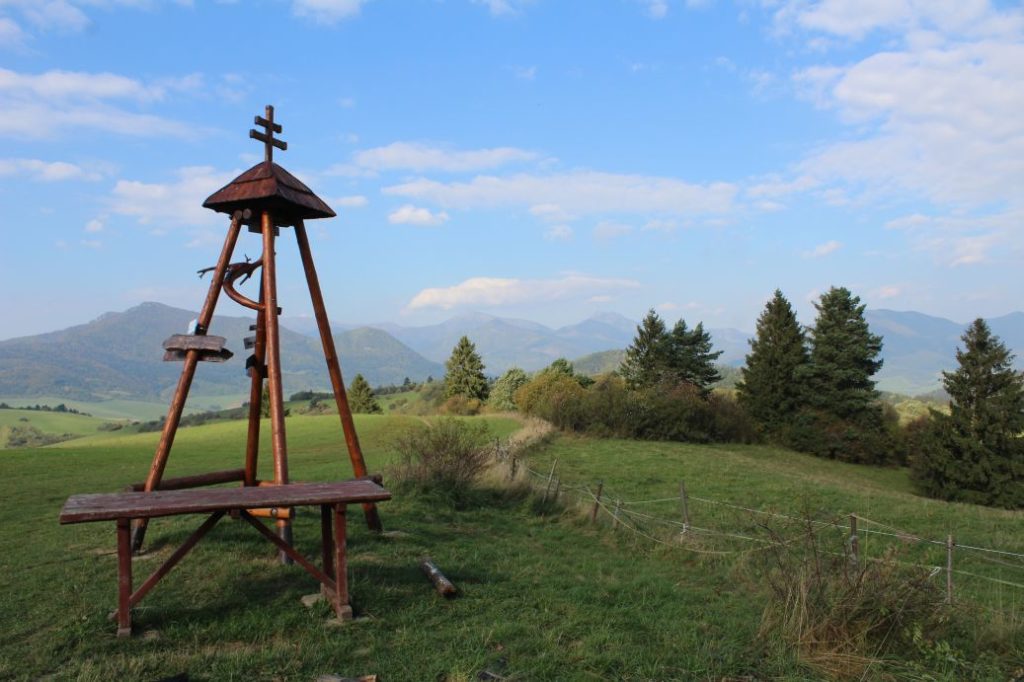 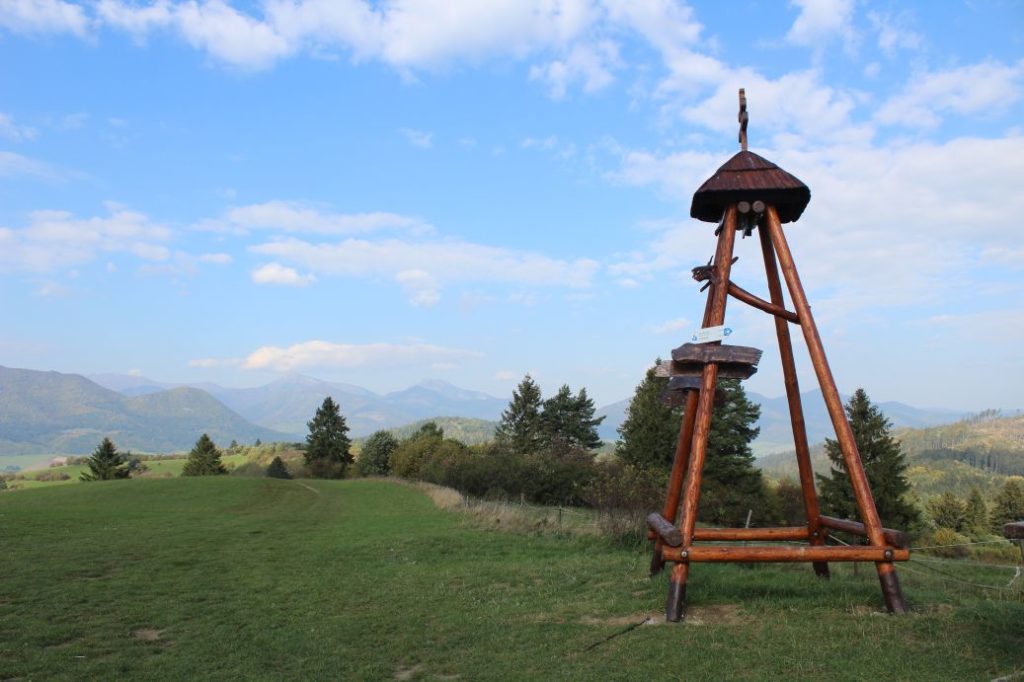 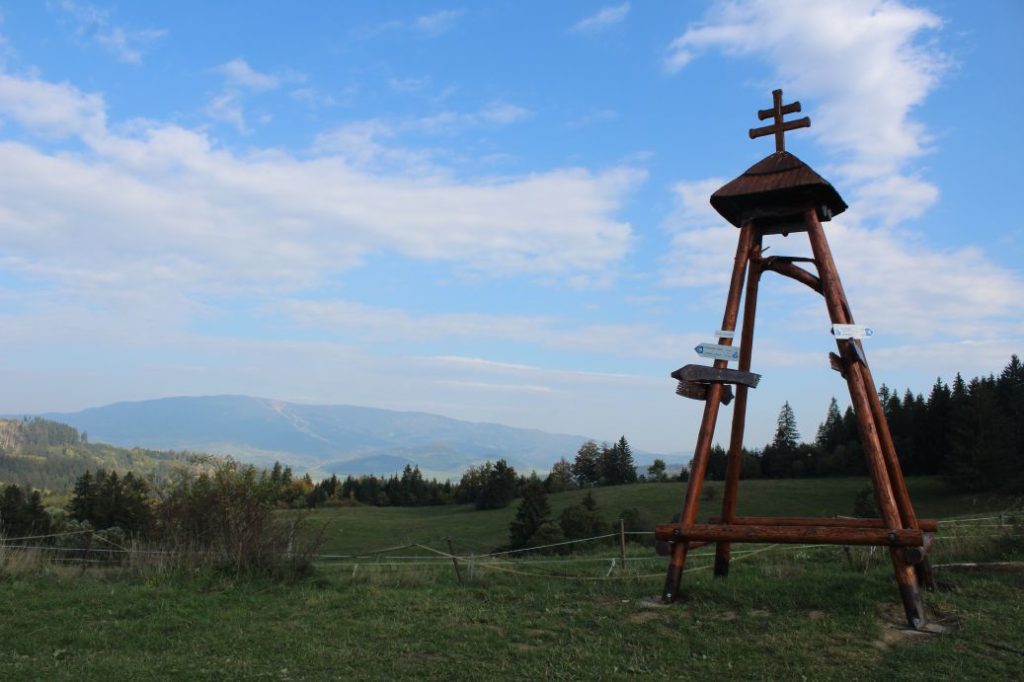 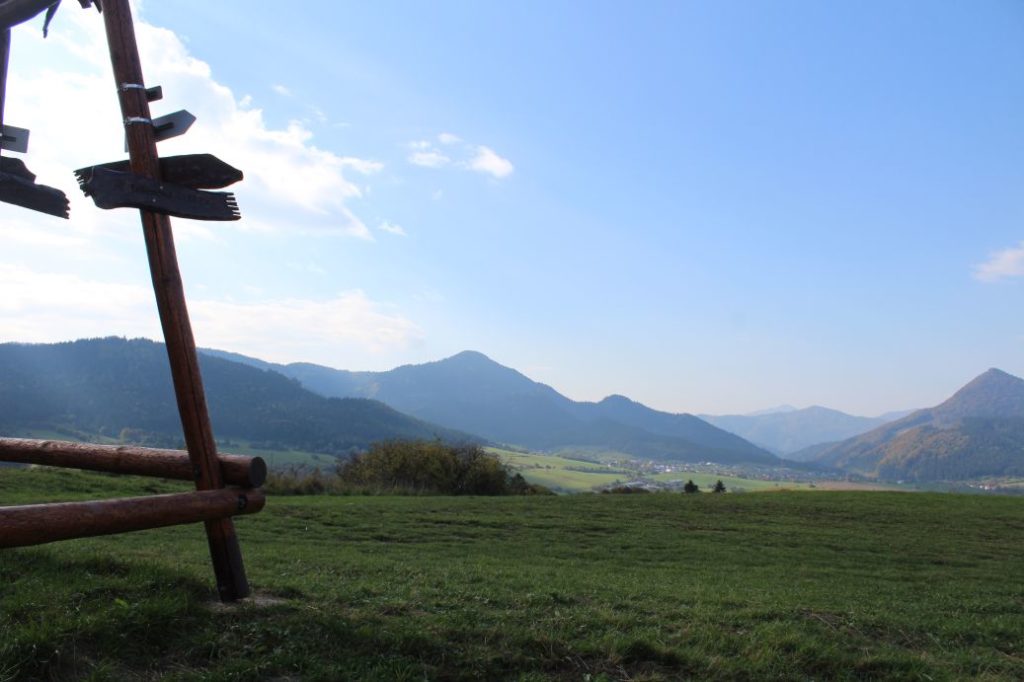 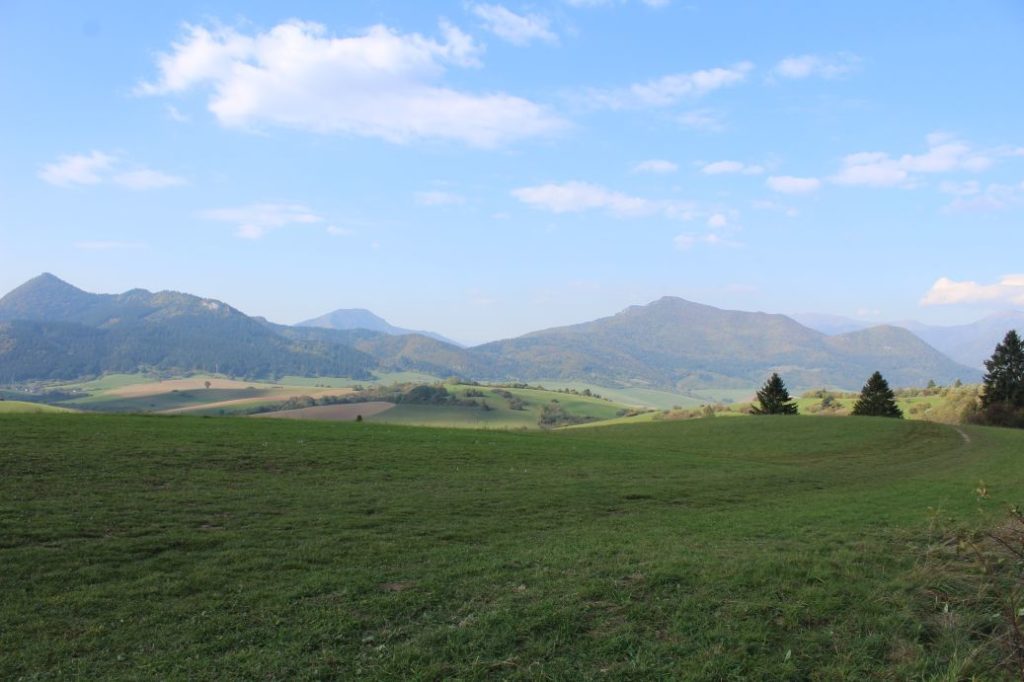 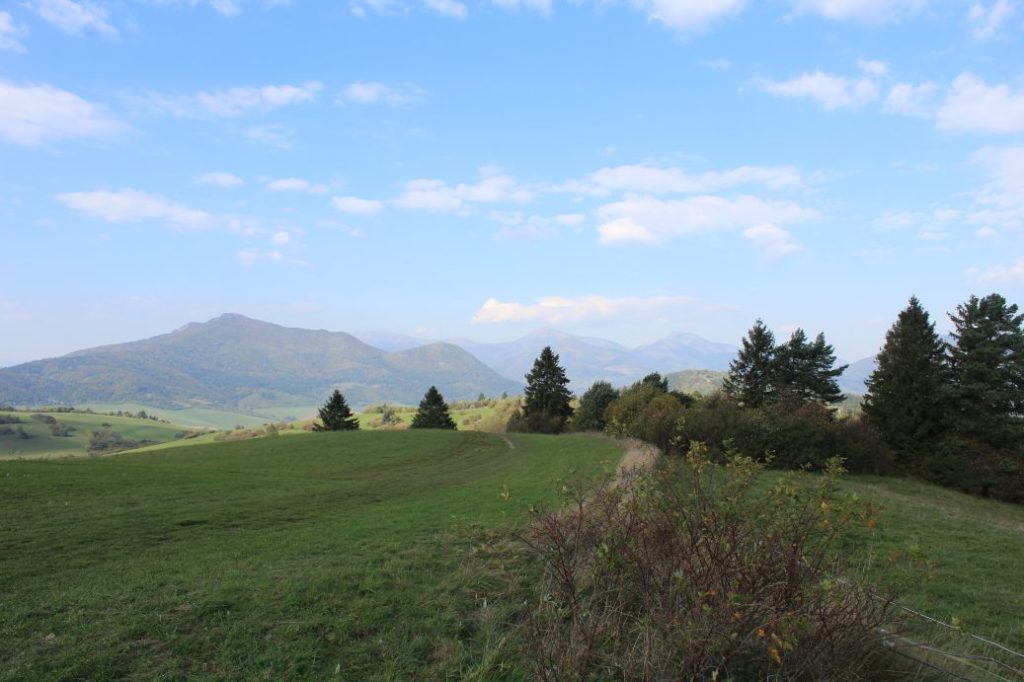 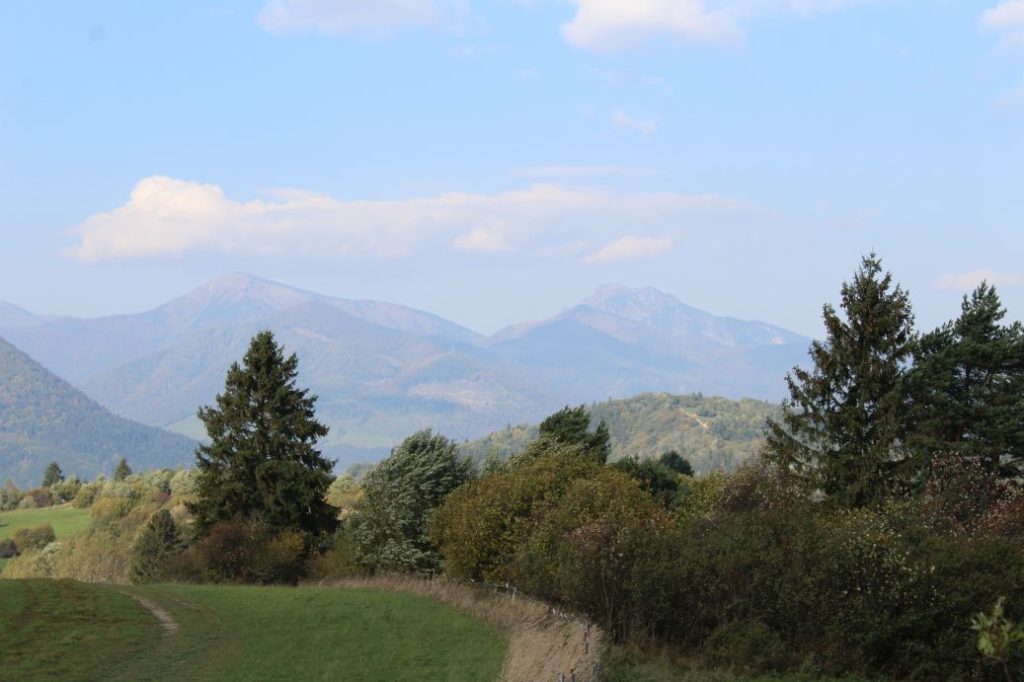 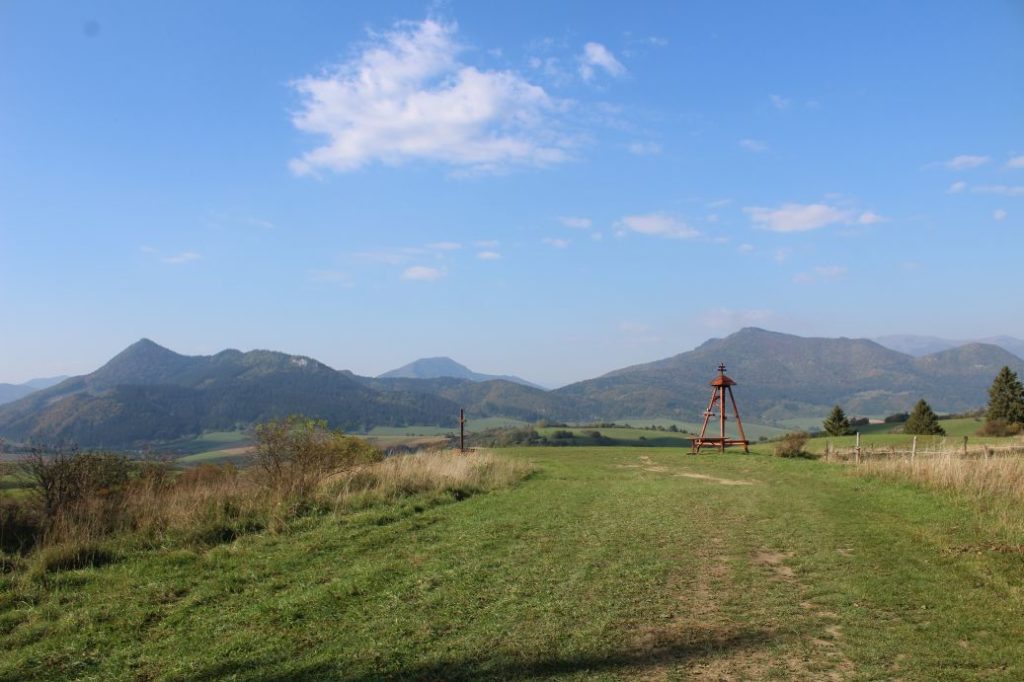