The Roman-Catholic church of St. Michael is situated in the town of Liptovský Michal, approximately 10 km away from the centre of Ružomberok.

The church, situated on a hill, is one of the oldest preserved church buildings in the Liptov region, it was built in the 13th century. The place where it stands was inhabited as early as the prehistoric period.

A dominant element of the main altar of St. Archangel Michael is the painting of St. Archangel Michael, made by painter Jozef Hanula, a native from the nearby town of Liptovské Sliače. Archangel Michael is wearing a white robe, in his left hand, he is holding a set of swaying scales, and in his right hand, he is holding a cross and a bundle of thunder-bolts, with which he has hit a winged devil lying below his feet. On the bottom right, there are open jaws with leaping flames, which symbolize hell. Under the painting, there is a sanctuary, with a relief of crucified Jesus Christ on the door. Above the painting, there is a statue of Virgin Mary, dressed in a silver robe and standing on the globe with a snake. There is a halo in the background. Placed at the very top of the altar is a sculptural group of the Holy Trinity.

By the organ, there are four church banners with pictures by painter Peter Michal Bohúň. In the pictures, you can find, for example, St. Ladislaus opening a water spring, St. Cyril and Methodius saying their goodbyes, Hungarian king St. Stephen, or Virgin Mary as the queen of the heavens.

The granite-marble baptistery is also rare. Its body is decorated with gold reliefs of sea shells. The inside of the bowl is made of black polished marble. Located at the top of the baptistery is a Latin cross.

Another feature of the church are the paintings of the apostles, St. Ján Nepomucký, king David or Aaron. The Late Renaissance brick pulpit is also interesting.

Two narrow Gothic windows have been preserved in the northern sacristy. On the wall of the sacristy, there is a cabinet with a painting of Jesus Christ.

Standing by the church is a wooden belfry from the 17th century, with an onion-shaped shingle roof at the top. It has a bell from 1636. It is inscribed: “My voice is the voice of Christ, I am calling you, enter the sacred place”. Another rare bell comes from the 18th century. It has a relief of St. Archangel Michael in a suit of armour. He is holding a sword in his right hand and an oval shield in his left hand. A killed dragon is lying at his feet. The bell is inscribed: “Protected by St. archangel Michael from Liptov”.

There is also a Trinity column from the 19th century. Fitted on the column is a sculptural group of the Holy Trinity. In front of the church entrance, there is also a small chapel of Virgin Mary. The premises of the church are enclosed with a low brick fence with wooden shingles. 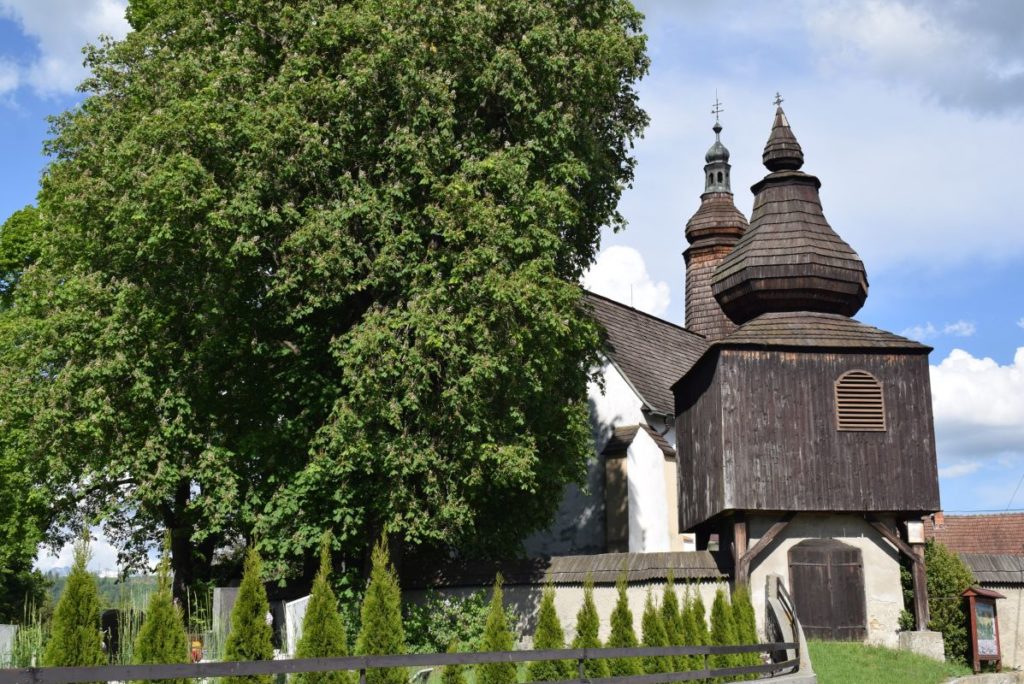 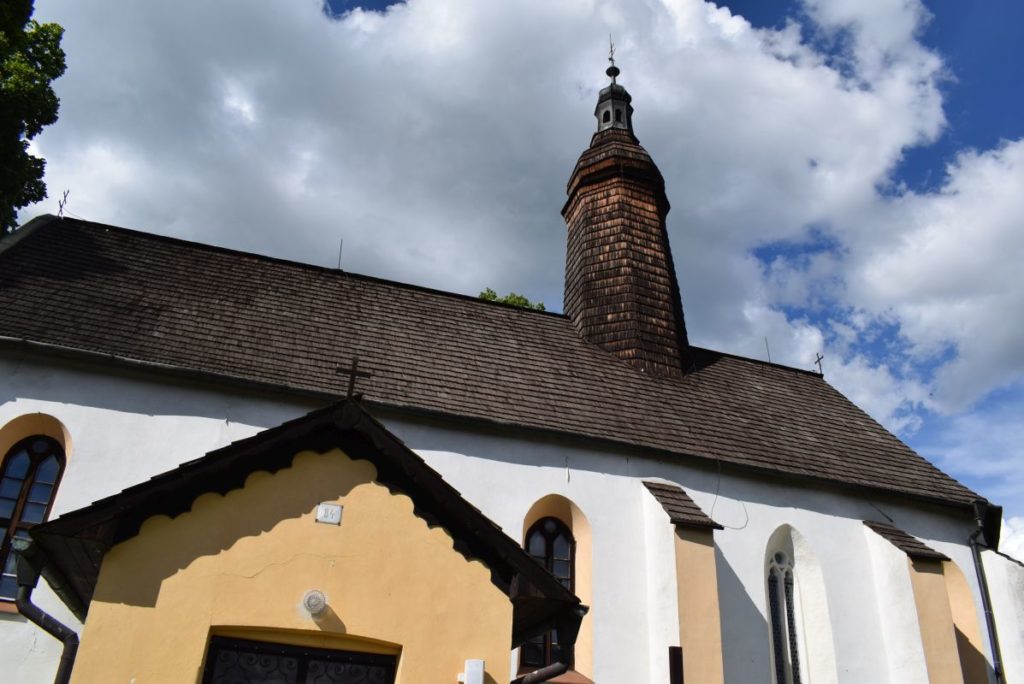 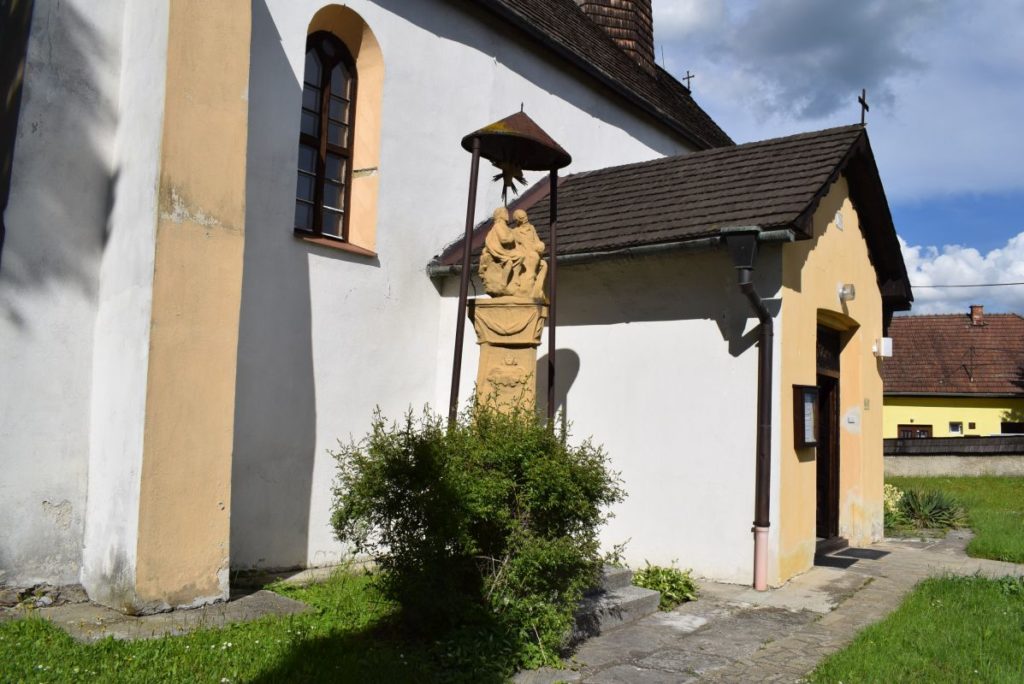 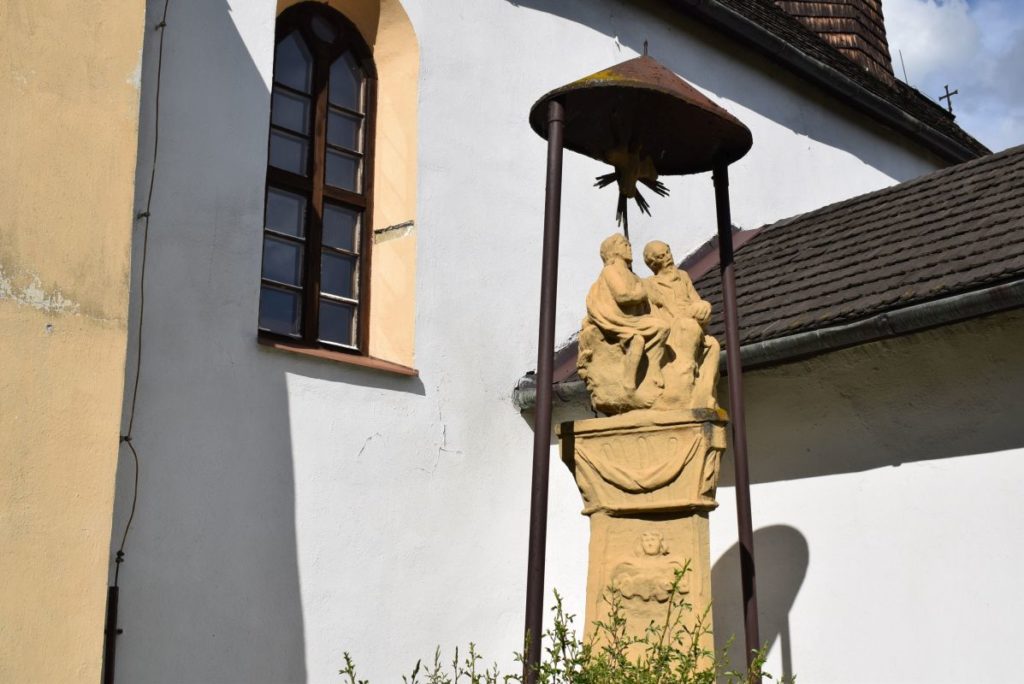 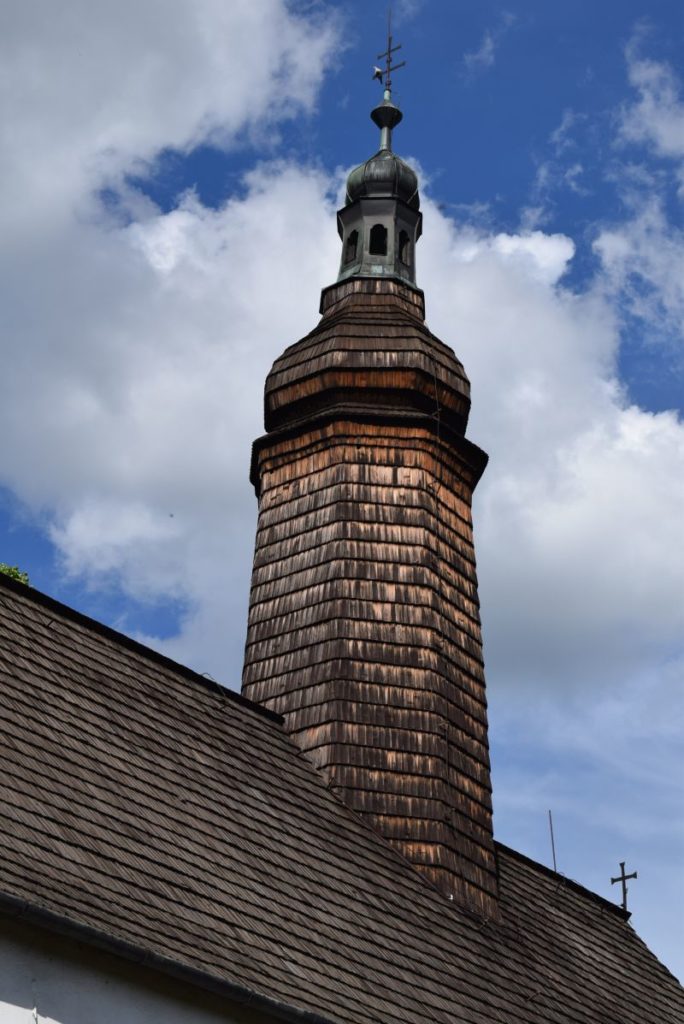 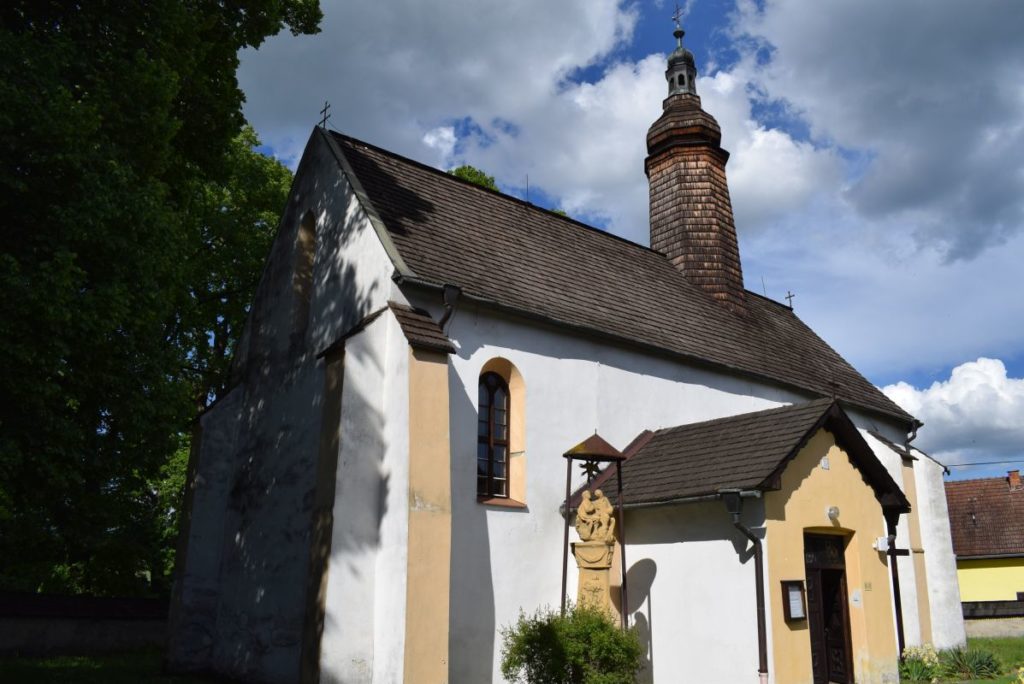 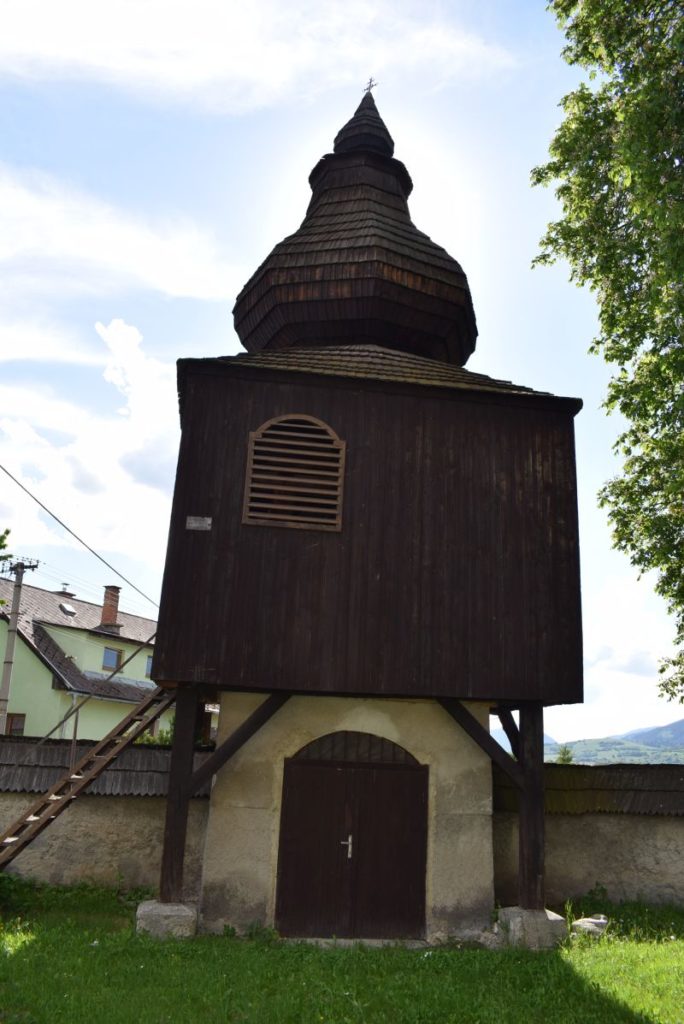 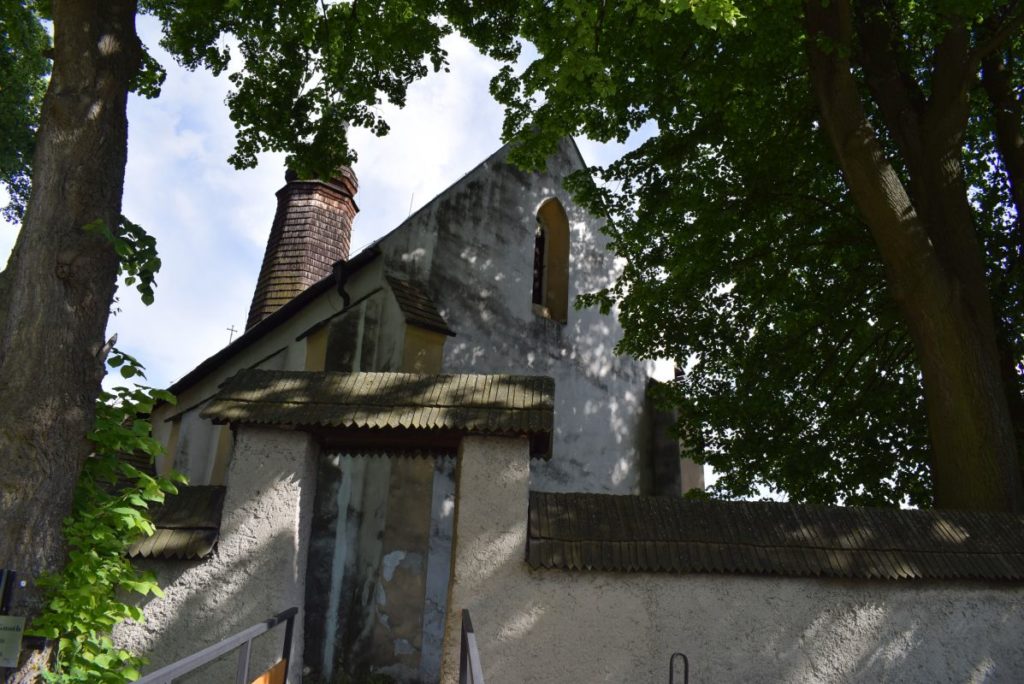 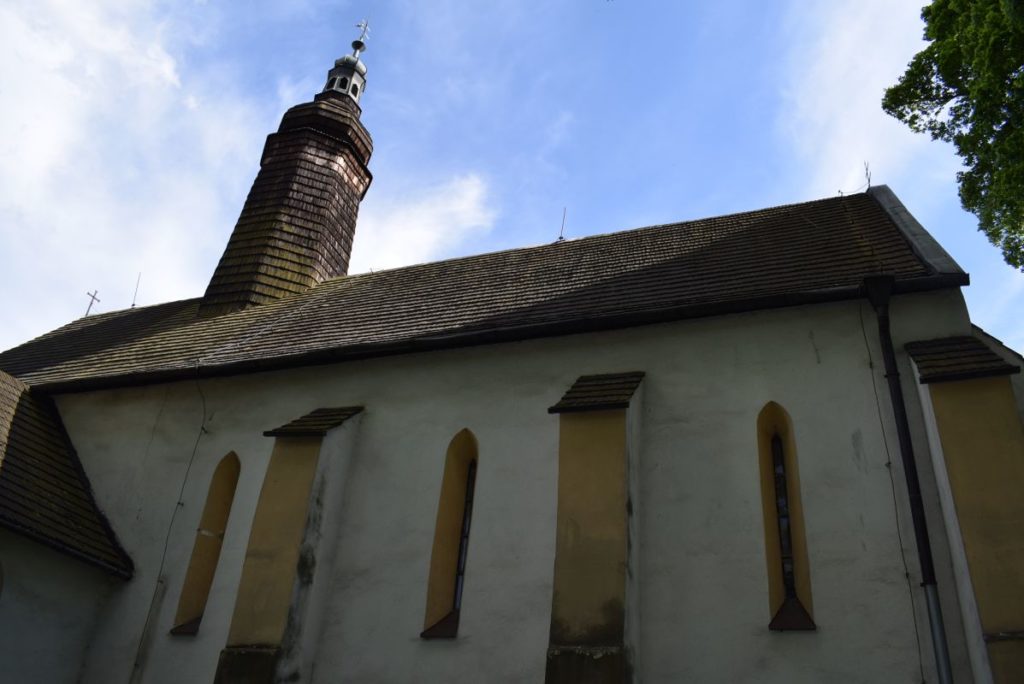 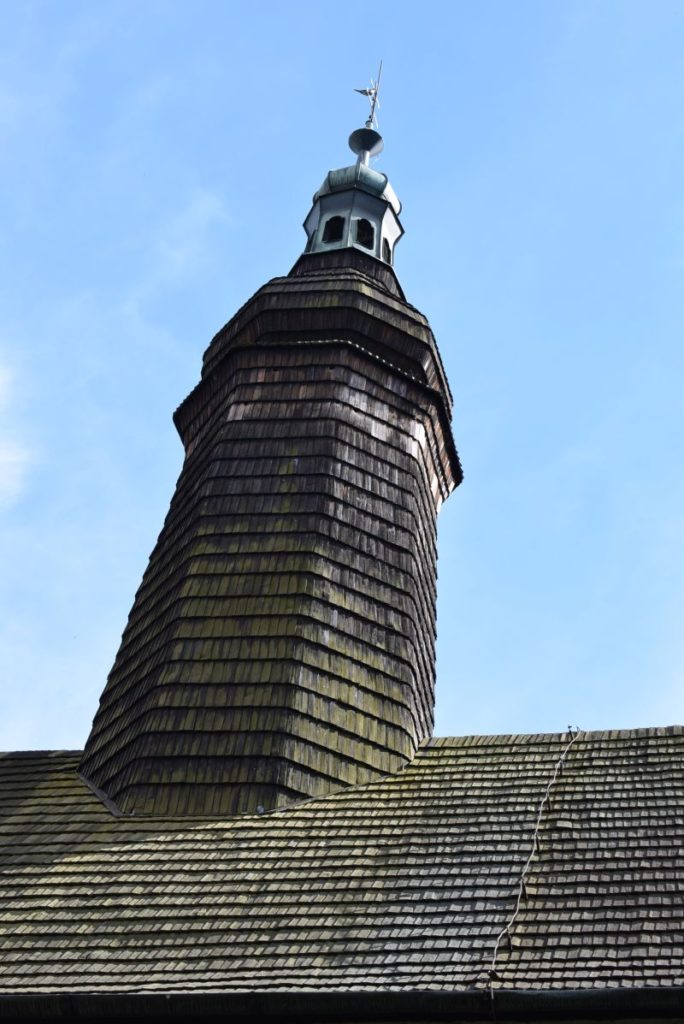 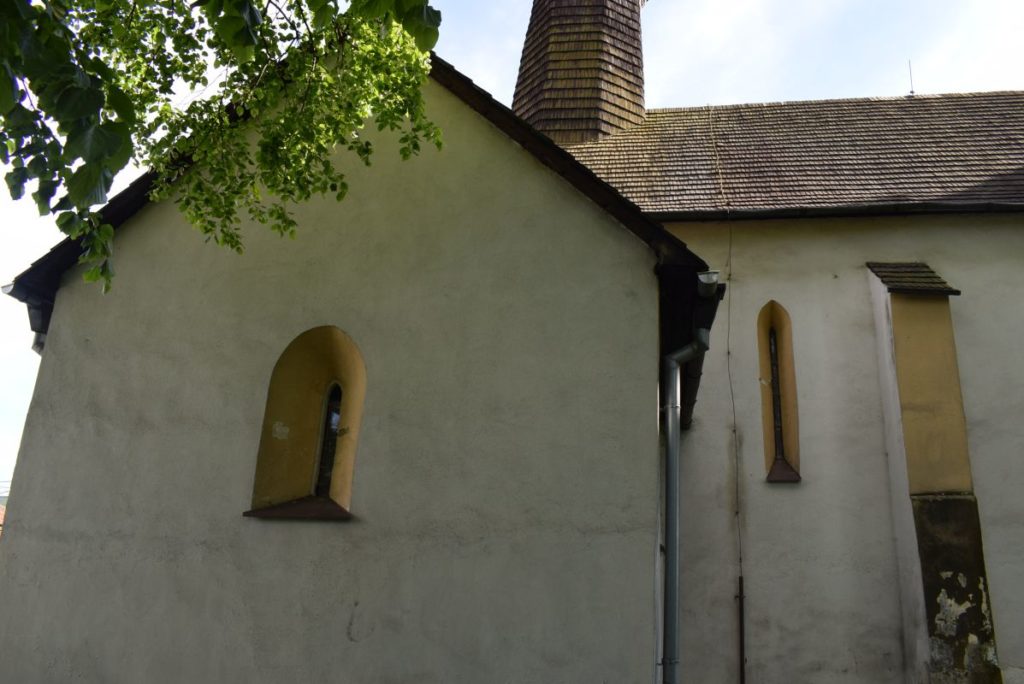 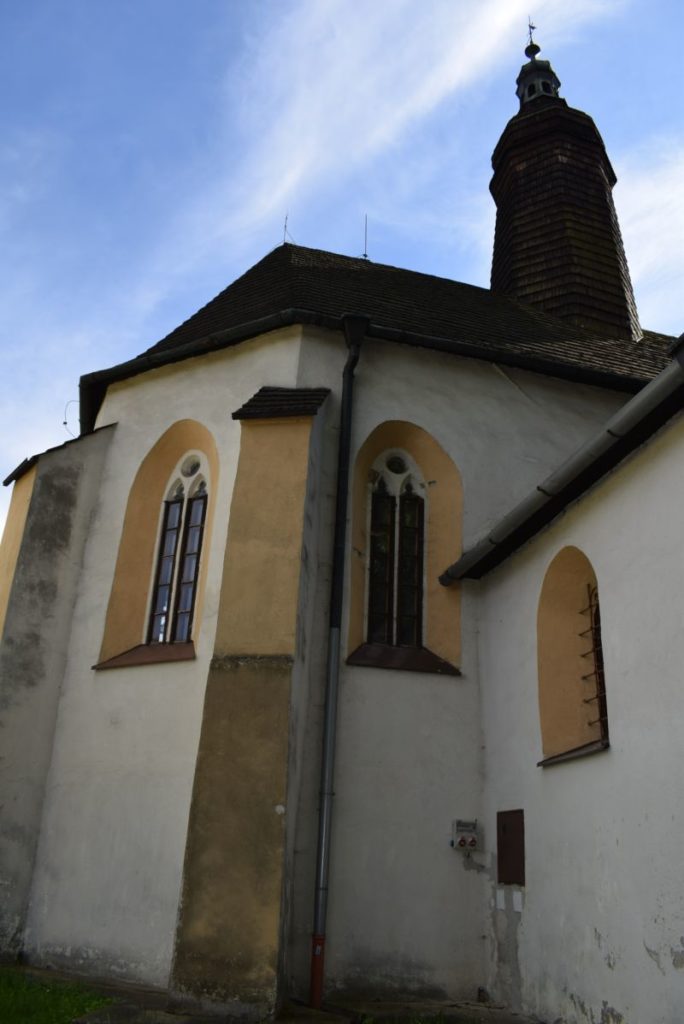 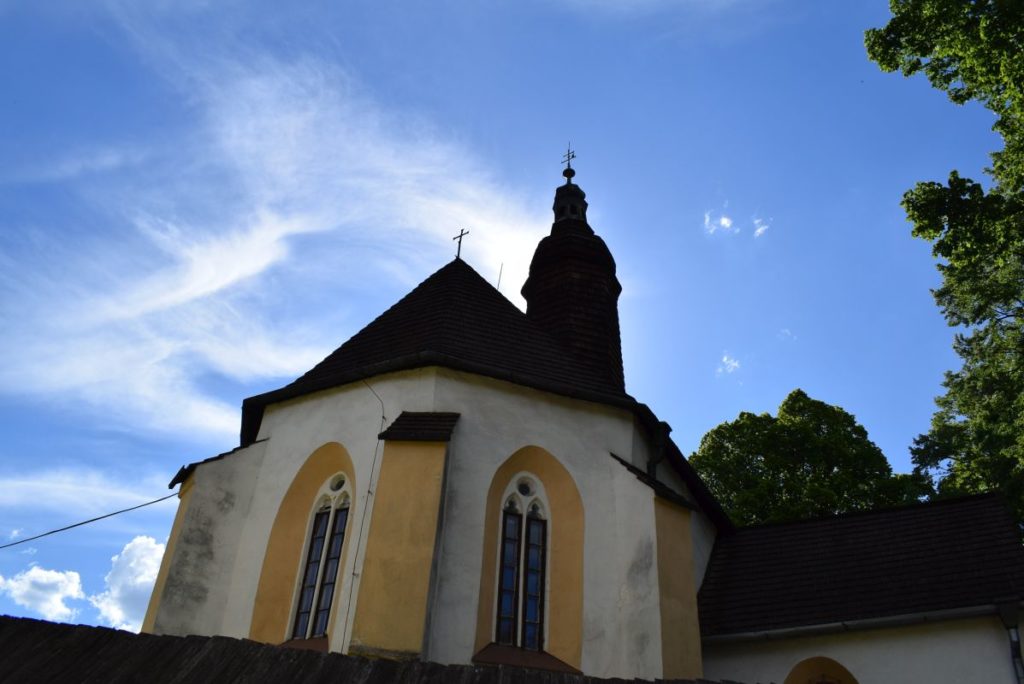 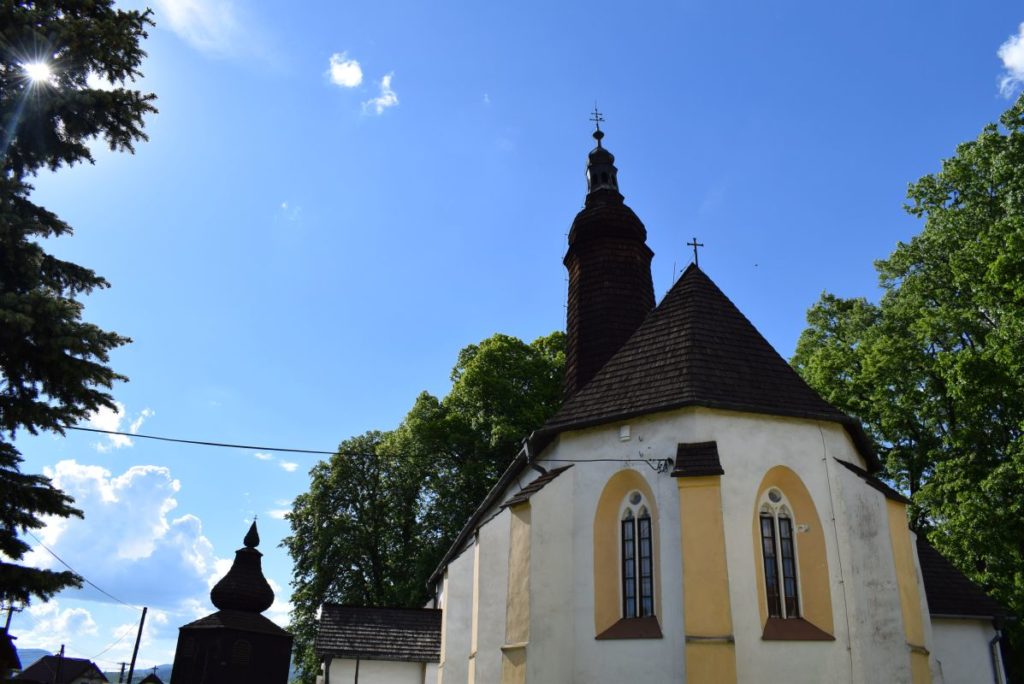 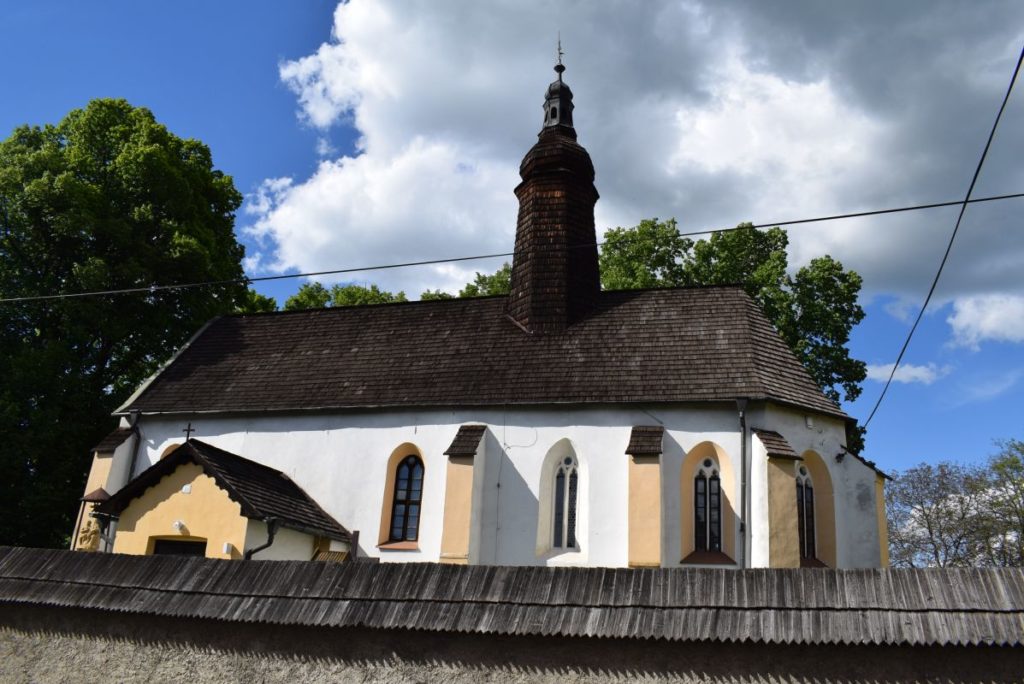 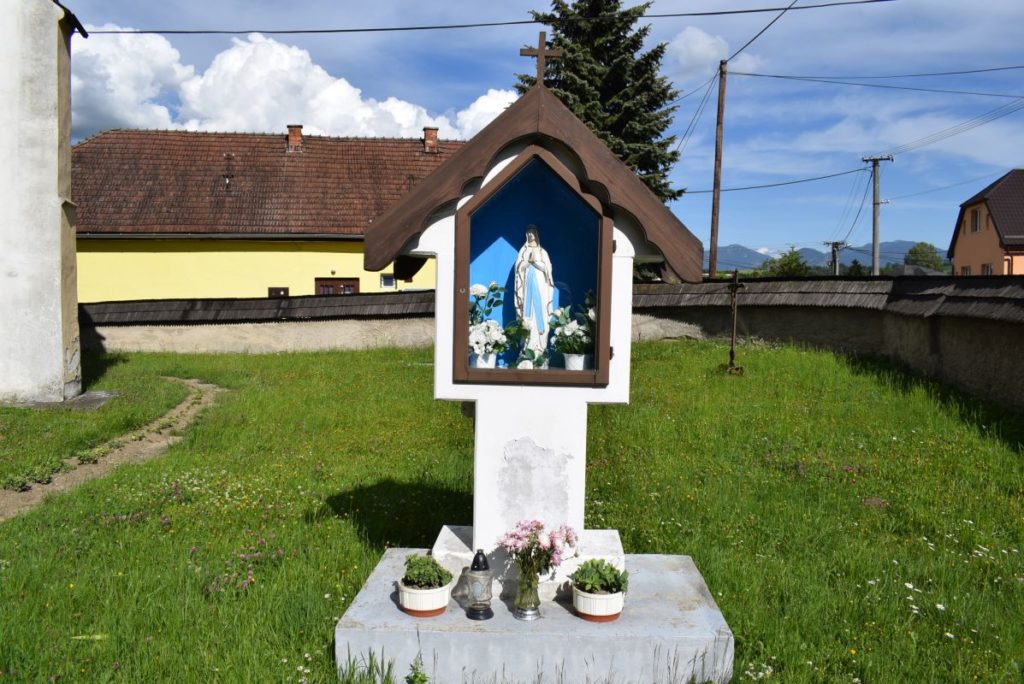 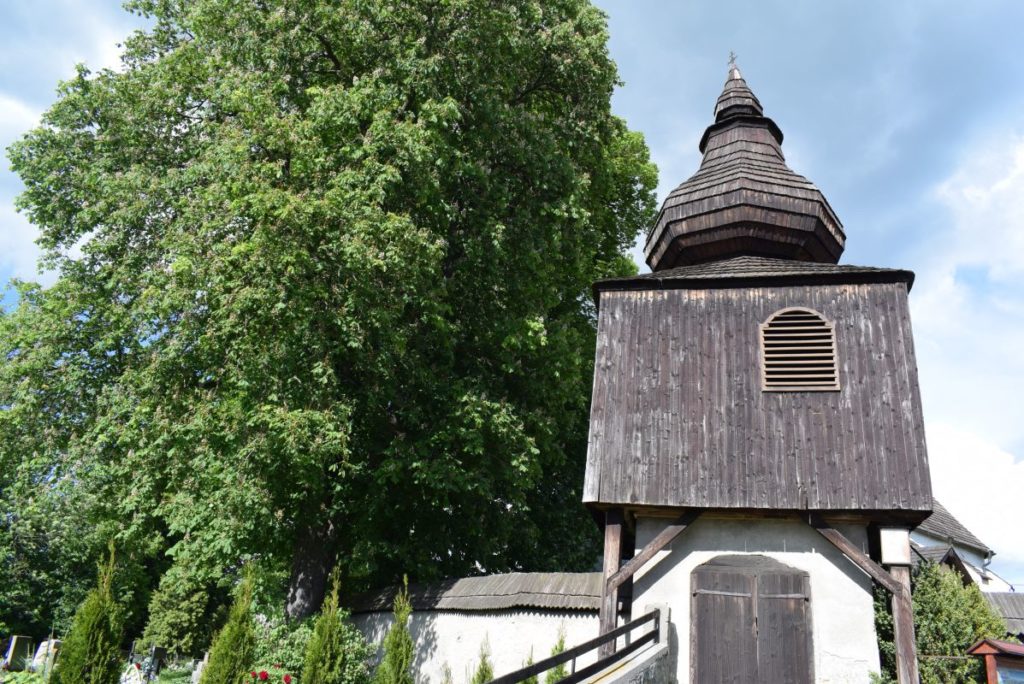 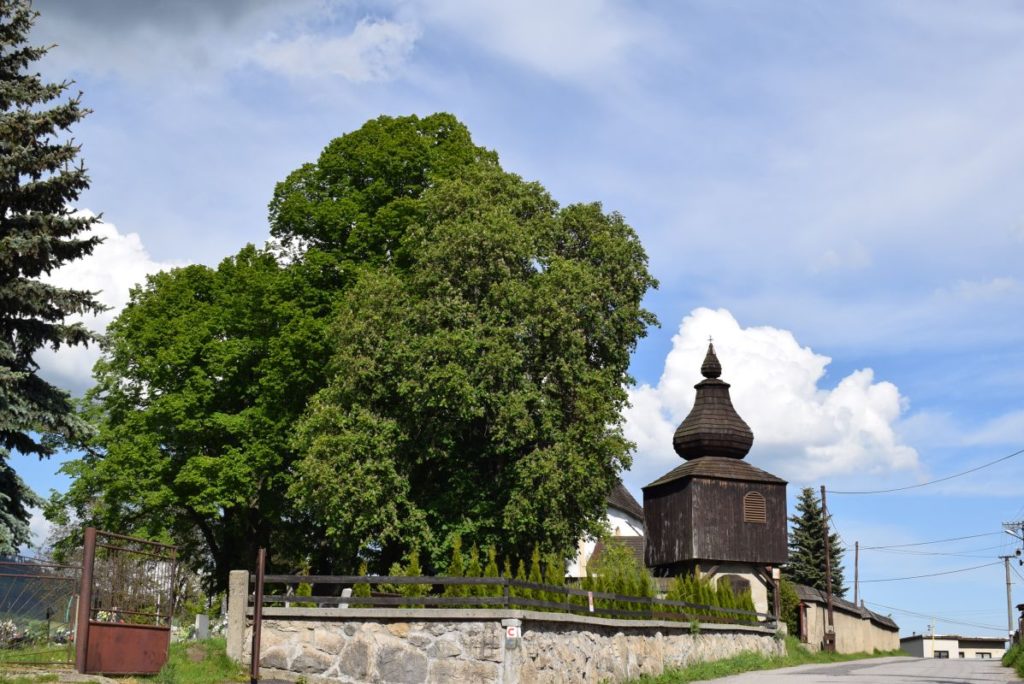