When thinking about the history of Ružomberok, we are taken back to the time when Ružomberok was granted town privileges, to the year of 1318. But prior to that moment, what had occurred in this territory of the modern-day town?

In the territory of today’s Ružomberok, archaeologists have found objects of Lusatian culture from the late Bronze Age as well as objects of Púchov culture.

In the centuries 10 to 12, the territory of today’s Ružomberok was inhabited by the Slavs, which is also supported by archaeological evidence. The fact that Slavs used to live here is also shown in the Slovak name of the river Revúca, which was chosen because of the roaring sound (“revanie”) the water made when hitting the river’s rocky bottom.

At the end of the 12th century, Liptov was incorporated in the Kingdom of Hungary and all the land was owned by the king. After the incorporation in the Kingdom of Hungary, Liptov became a part of Zvolen County. In 1233, Hungarian king Ondrej II (Andrew II) was gifting king’s land to the loyal ones. For his loyal service to the king, a piece of king’s land in the territory called tera Reucha – Revúca was given to Hudek. It is assumed that there was a nun monastery of saint Dominic built near Revúca.

Ružomberok was a strategic area. It functioned as the estuary of the path from Zvolen and northward to Poland, which was crossing the west-east path along the river Váh. The territory of future Ružomberok had an important position as a crossroad point.

In the 13th century, a Slovak village developed here with the same name as the river – Revúca. At that time, the area of today’s A. Hlinka Square was uninhabited. After harvesting of wood, the hill was grown over with self-seeded plants and wild roses. In the middle of the 13th century, the lieges from Liptov were also fleeing to southern regions, worried about invasion by the Tatars. After 1270, the king ordered the original inhabitants to return. But he also allowed new settlers – guests to whom he promised generous privileges – to come to the abandoned territories. Thus came the German colonists from Spiš, Nemecká Ľupča or Banská Štiavnica. They were people from mining towns, who knew how to work with stone and how to use it in buildings.

From 1233, the territory along both sides of the river Revúca at the confluence with the river Váh, where the village of Revúca had already been built, belonged to private owners. The German guests could only settle down westward of the river Revúca near Váh (but there was a risk of flooding), or on the hill, on the highland above the village. And so, they decided to build their village right on the hill. There they built their homes, a village square for the markets, and a small church. The earliest record about the church is from 1312. It was consecrated to St. Ladislav, the king of Hungary. The church is one of the oldest preserved buildings in Ružomberok.

After they had arrived at the place of their future village, on the felled hill, they saw plenty of blooming bushes of the field rose. And here we get to the legend which says that after seeing the place of their future home and the plenitude of roses, the village was named the rose hill – Rosumberg. The name took up and, in variations, it has been in use to this day.

When the village of Revúca, located in the territory of today’s Ružomberok, was sold in 1288, there was also a mention about the neighbours of the village. On the eastern side, it was the village of Gothal in the valley of the Štiavnica stream, and from the other side, from the south, it was the land of the Sons of Boček in the valley of the Revúca river, in the area of Biely Potok. An All Saints Church was built for the villages of Revúca and Gothal on an elevated area midway between them. This church is one of the oldest sacral buildings in Liptov preserved to this day.

In 1318, at the request of Zvolen county head, master Donč, a charter was issued in Budín by Esztergom archbishop Tomáš (Thomas), which granted to townsmen of Ružomberok or guests from Ružomberok the same privileges as those used by the townsmen and guests from Nemecká Ľupča. The citizens of Ružomberok could elect their mayor, their own vicar, they could hunt freely and they could fish with the exception of the Váh river. In 1340, king Karol Róbert (Charles Robert), during his stay in Nemecká Ľupča, confirmed and supplemented the privileges of Ružomberok, he defined the town area and from that time until the end of the 14th century, Ružomberok was developing as a free royal town. Even though the original charter has not been preserved, many of the transcripts have been. The town privileges were exercised in such way that they mostly applied to the German townsmen living on the hill and not to the Slovak inhabitants living in Podhora (foothill). That started disputes between the two groups of inhabitants, which even made king Ľudovít (Louis) intervene with his mandate from July 10, 1376.

In 1325, the county head of Zvolen, master Donč, exchanged the village of Revúca including possessions for Vyšný Kubín and joined it with Ružomberok. The village inhabitants living in the foothill were joined with the Ružomberok vicarage. This inhabited area was named Podhora (Sub monte).

Master Donč became the master of Liptov as early as the beginning of the 14th century. He joined king Karol Róbert (Charles Robert) in the battle of Rozhanovce in 1312 against Matúš Čák Trenčiansky (Matthew Csák of Trenchin), he fought bravely and helped the king win. For his services on the battlefield he was appointed the county head of Zvolen and Liptov. Later he excelled in conquering of Komárno and Vyšehrad, for which the king gifted him castles of Sklabiňa and Likava including their estates.

The town’s development partially stopped in 1390, when king Žigmund Luxemburský (Sigismund of Luxembourg) gave Ružomberok to the Likava estate.

In the course of centuries 14 and 15, the town was awarded more important privileges by Hungarian kings, such as the right to free market and the relief of the inhabitants from paying the toll in the entire territory of Hungary. In the 14th century, control over the town was in the hands of the German guests, from the 15th century it gradually passed into the hands of the Slovak inhabitants.

In 1405, king Žigmund (Sigismund) granted Ružomberok the right of the sword. In 1431, Ružomberok was invaded by the Hussites led by Prokop the Great.

In 1528, Liptov was invaded by the army of general Katzianer in the service of archduke Ferdinand. The soldiers took food, cattle and horses from the people, and raped the women. Later came the army of Ján Zápoľský (John Zapolsky), which continued the plundering. In 1578, the first guild was established in the town.

In 1601, Ružomberok suffered from a severe plague epidemic. In 1622, the Hungarian crown of St. Štefan (Stephen) was held for one night in St. Žofia’s (Sophia’s) Manor House. In 1678, after several days of siege, the Kurutz conquered and burned down Saint Žofia’s Manor House and slaughtered its residents. The victorious army then plundered the town. In the 17th century, Ružomberok was ravaged also by several major floods and fires. Those re-occurred several more times in the following centuries as well.

In 1703, during Rákoczi’s uprising, the army occupied Ružomberok as well as Likava. In 1707, the Likava castle was demolished and the nobility moved to the Saint Žofia’s (Sophia’s) Manor House. In the 18th century, potatoes were grown for the first time in Ružomberok. The entire 18th century was filled with lengthy legal disputes between Ružomberok and the Likava nobility.

In the 19th century, Ružomberok suffered from a cholera epidemic, which killed 8 percent of the inhabitants.

At the end of the 19th century, the Košice – Bohumin railway was built, and it passed also through Ružomberok. Consequently, industries began to develop, especially textile and paper industries, but also plants for the production of bricks, matches and “bryndza” cheese emerged. Rybárpoľská textile factory was the largest one in the entire Hungary.

At the beginning of the 20th century, Ružomberok was one of the largest towns in Slovakia. In terms of the number of inhabitants of Slovak nationality, it was actually the largest town. It also became an important financial and industrial centre of Slovakia and a significant centre of national life.

An important event was the Černová (Czernova) tragedy, which resulted in death of 15 innocent people. Andrej Hlinka, a priest and a patriot, one of the main fighters for the freedom of Slovakia, was also active in Ružomberok.

During the Slovak National Uprising, the local army joined the uprising and defended the town against the German troops. Well known are especially the battles for control of Ostrô hill, which is situated above the Ružomberok’s town district of Biely Potok. Ružomberok was liberated in April of 1945 by the troops of the Soviet Army and the 1st Czechoslovak Armoured Brigade Group.

During the Communist regime, the town lost its status as the district seat and its development stagnated in comparison with several other surrounding towns. In 1997, Ružomberok became the seat of the district again.

In addition to its history, Ružomberok can also be proud of what it offers today. A rich cultural life of the town is shown in the fact that it is the seat of various associations, such as the association of Ružomberok writers, which profusely engages in publishing activities. Ružomberok photographers are well known throughout Slovakia as well as abroad, because the members of the Association of Slovak Photographers, which has the seat in Ružomberok, win awards for their work at almost every exhibition they participate in. Cultural life needs to be maintained and developed, that is why we educate next generations in various artistic directions, as evidenced by a large number of art schools. When it comes to Ružomberok, most of you, however, hear especially about the success of the Ružomberok’s football team, and mainly the successes of the Ružomberok’s female basketball players, who successfully represent our town. Ružomberok is also a university town, as evidenced also by the local Catholic University with many faculties, which educates young people from all over Slovakia as well as the world. In the commercial sector, the pump mill is probably of most popularity, producing quality paper exported worldwide. There are smaller companies too, which supply their products to large and well-known companies all over the world. In the health sector, one must not forget to mention the Central Military Hospital, which is one of the best in Slovakia, or the eye clinic, which is located in the town and visited for its services by clients from all over Slovakia. Last but not least, we should probably mention what Ružomberok was gifted already at its origins, its beautiful mountainous and sub-mountainous surroundings, which are used for relaxation, rest, but also in active ways. Let’s mention, for instance, Malino Brdo Ski Centre, Bike Park for cyclers known all throughout Slovakia, relaxing zones such as Čutkovo or Hrabovo, or the unique location of folk architecture, Vlkolínec, which has been added to the UNESCO World Cultural Heritage List for its preservation level and uniqueness. Plenty of marked hiking and biking trails, natural monuments, waterfalls, curiosities and attractions, attract countless visitors to the region of Ružomberok, where they will find a quality place to stay with plenty of accommodation options, restaurants and services, which are part of the experience.

A short video presentation of Ružomberok and its close surroundings: 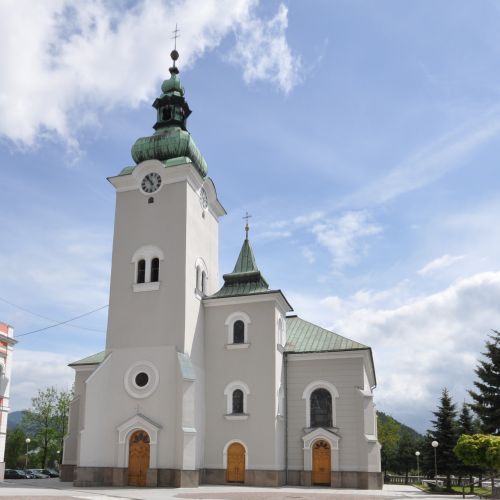